By the time I ran the third Superstition Challenge at Thinktank Science Museum in May 2005 (once again resulting in outstanding media interest), I was becoming quite disillusioned with the whole thing.

Naturally I was delighted with the praise I received from management colleagues (who were greatly impressed by the publicity generated); and yes, I was happy to be promoting scepticism and rational thinking (issues close to my heart) in such a high-profile way.
Yet the exceptional level of interest demonstrated by the media for the Superstition Challenge - compared to the level of interest demonstrated for my planetarium shows or temporary exhibitions in general - was actually quite nauseating.

I mean, really? On a regular basis my colleagues and I created and put on outstanding shows and exhibitions about the Universe, life on Earth, the origin of humans and the fate of our planet. Most such temporary exhibitions are expensive and involve tremendous amounts of work. Yet trying to persuade the media to report on such superb attractions, is literally like pulling teeth!
Yet something simple and inane like a bunch of groundless superstitions results in a media extravaganza?!
It's all very disheartening when you think about it.
A reminder, I guess, that life can indeed be very random. The things that matter don't always receive the attention they deserve.
Interestingly, speaking of randomness, in August 2004, after delivering my second Superstition Challenge, I attended an Edinburgh Fringe Festival performance by comedienne Lucy Porter called Lady Luck, after which I wrote this on my blog:

If I didn’t know better …

… I would believe I'm an inherently lucky person, benefiting from a mysterious universal force sprinkling “luck” on my life.

For instance, in August 2004 I attended an entertaining performance called "Lady Luck" by comedienne Lucy Porter at Edinburgh’s Fringe Festival (see article below). As it turned out, my friend and I ended up enjoying the show for reasons quite different to those of the rest of the audience.

Before I continue, I need to explain that when it comes to luck, superstition, astrology and other pseudoscience; I am a proactive sceptic! To date, there is absolutely no evidence supporting such beliefs (even though it would be the easiest thing in the world to demonstrate proof). One of my personal passions is to enlighten people regarding such erroneous thinking. For example, as a science museum professional, I recently delivered a successful and entertaining public programme called "Superstition - Science Fact or Fantasy?" (see: www.superstition.dimaggio.org ). Among other things, visitors are encouraged to deliberately disregard potentially malevolent superstitions; witness an apparent “psychic feat”; and discover the shortcomings of astrology. All of these activities are designed to promote healthy rational thought. This event has caught on with other science museums, and is now regularly hosted every time Friday 13th comes around.

In fact, one reason why I enjoyed Lucy Porter’s show so much was because in her performance she did exactly what we do in our exhibition – smashed a mirror; walked under a ladder; opened an umbrella indoors; spilled salt (lots of it!); and much more. She also successfully weaved into her show what investigators have discovered about ‘good luck’ and how our life attitudes actually influence our personal quota of ‘luck’. Lucy Porter did all this in a wonderful comical manner, something we science educators can learn a lot from.

Interestingly, at the end of her performance Lucy held a lucky draw to determine who in the audience was blessed with good luck - and out of approximately 160 people, guess who won the prize?

I did - even though I was likely the most sceptical, non-believing person in the entire theatre!

The bizarre thing is, I am in fact the 'luckiest' person I know! I've won a brand new motor car before, and I win occasional raffles (although nothing big on the Lottery yet, just a few small prizes). And with Lucy Porter's lucky draw, I have to admit I felt great anticipation in the build-up, as I realised winning this particular draw would be the greatest of paradoxes!

However, I still don't believe in ‘luck’. It IS all mere co-incidence. Lucy Porter ended her show by saying the exact same thing.
After which a bright light appeared above me, and I was sprinkled with glitter.

And finally, as further proof that randomness works both ways ... 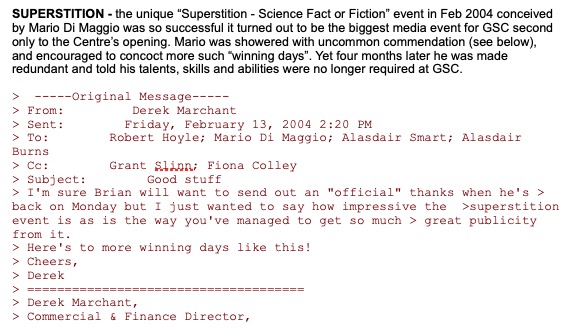