On launching the UK's first purpose-built digital dome (Thinktank Planetarium) in December 2005, Mario Di Maggio discovered the new 360° medium appealed not only to educators and scientists, but also to a wide range of artists. With support from Arts Council England - and despite opposition from Thinktank Museum management - numerous fruitful collaborations with local artists ensued. Three outstanding initiatives were the invention of a new art form (Fulldome Dance), the birth of the Dome Club experience, and the establishment of a SciArt Gallery. 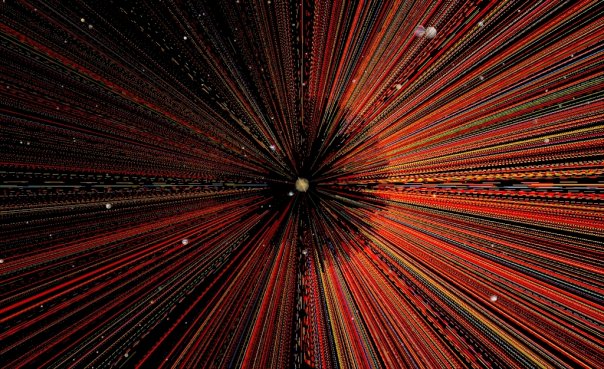 According to artist and science graduate Emei Ma: 'If science is as an organized body of knowledge about the physical universe and art is any creative process; the two together, science art, or SciArt, might be defined as: "Any creative expression where the intent of the artist is to convey an observable understanding of the physical universe". As a result, the science permeates the art in multiple ways' 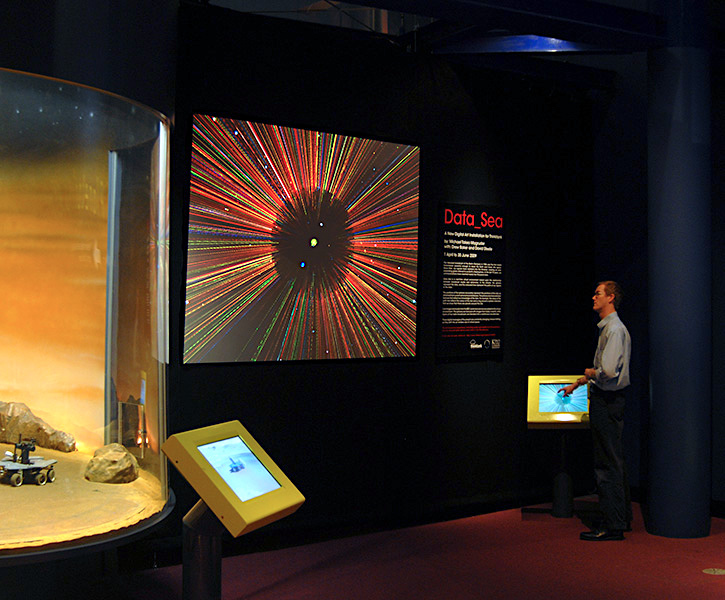 Our first original art installation was Data_Sea (a real-time digital representation of the Radiosphere), created by professional artist extraordinaire, Michael Takeo Magruder. The artwork consisted of an interactive exhibit (above) located outside the planetarium, with the following associated components:
Message in a Sphere - a 20min presenter-led planetarium show about the Radiosphere that included a projection of the artwork on the dome 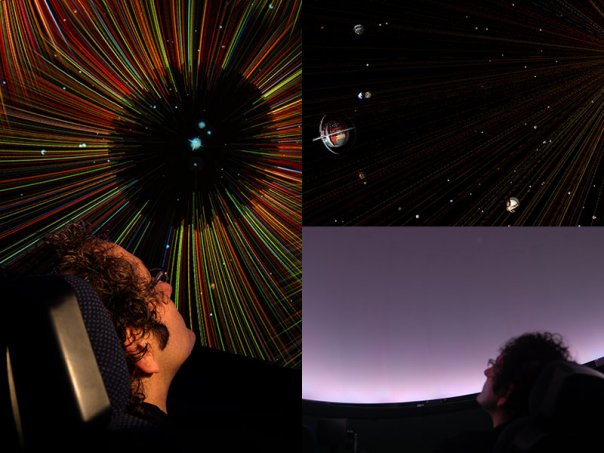 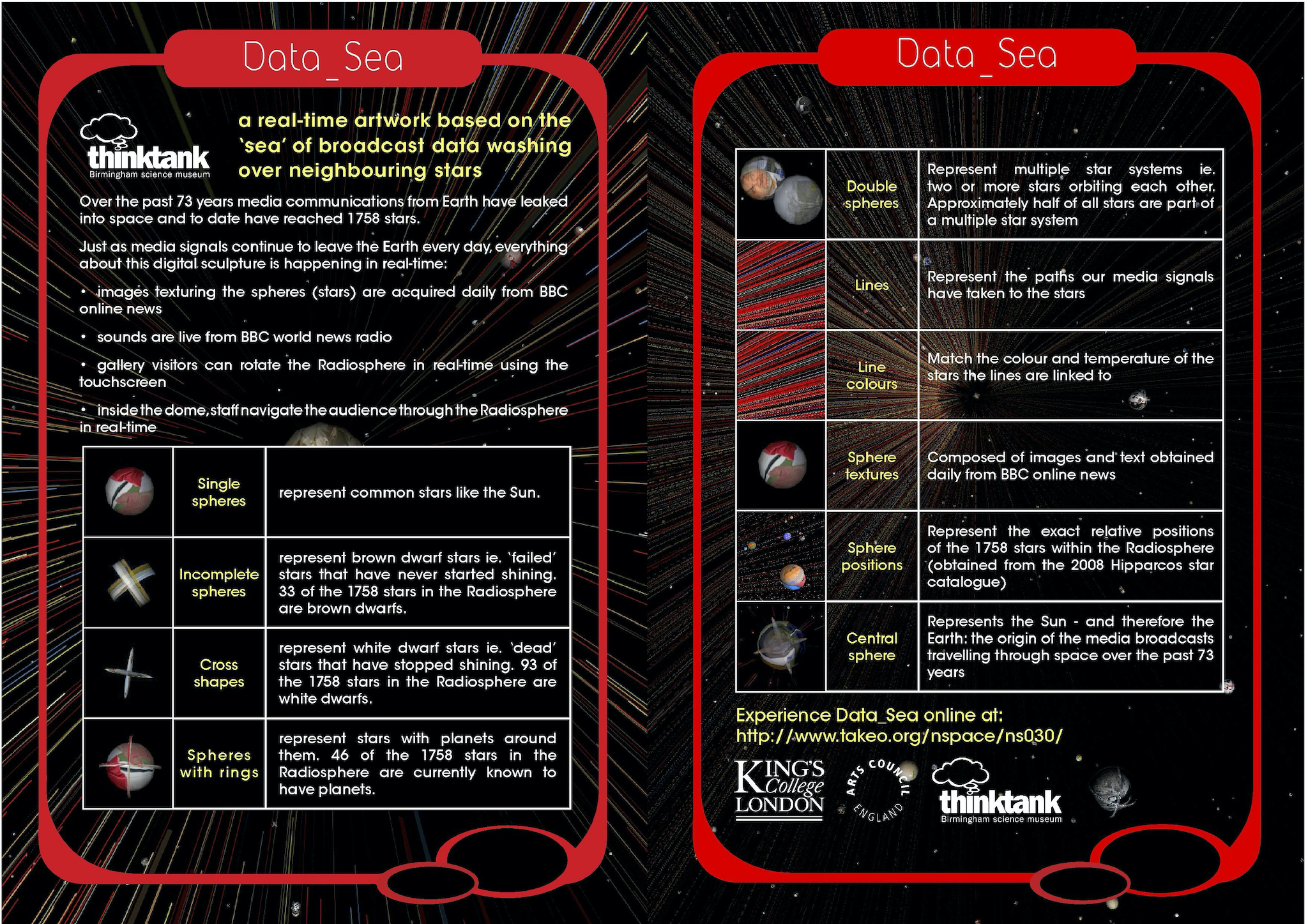 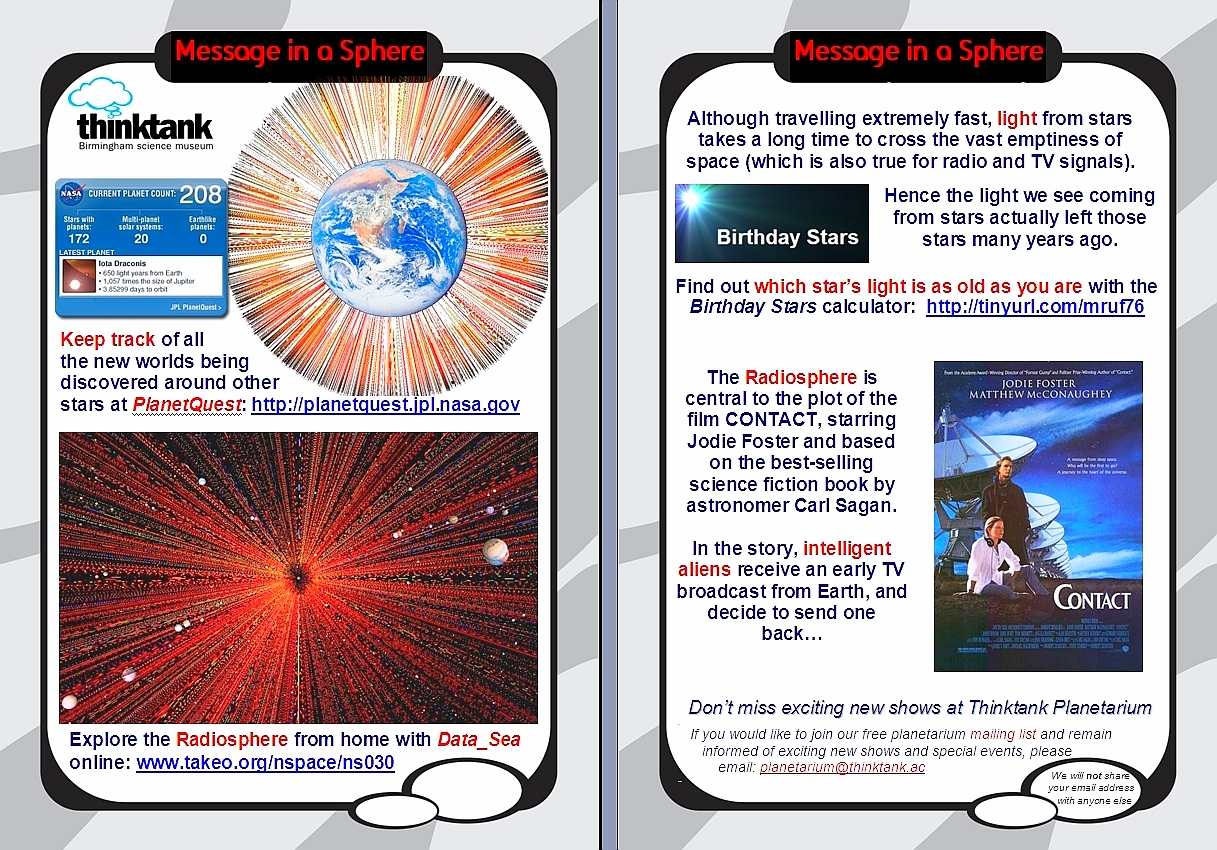 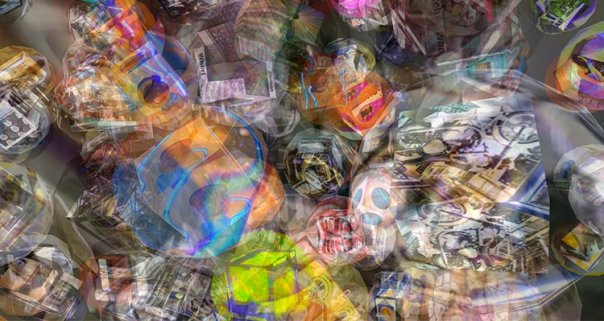 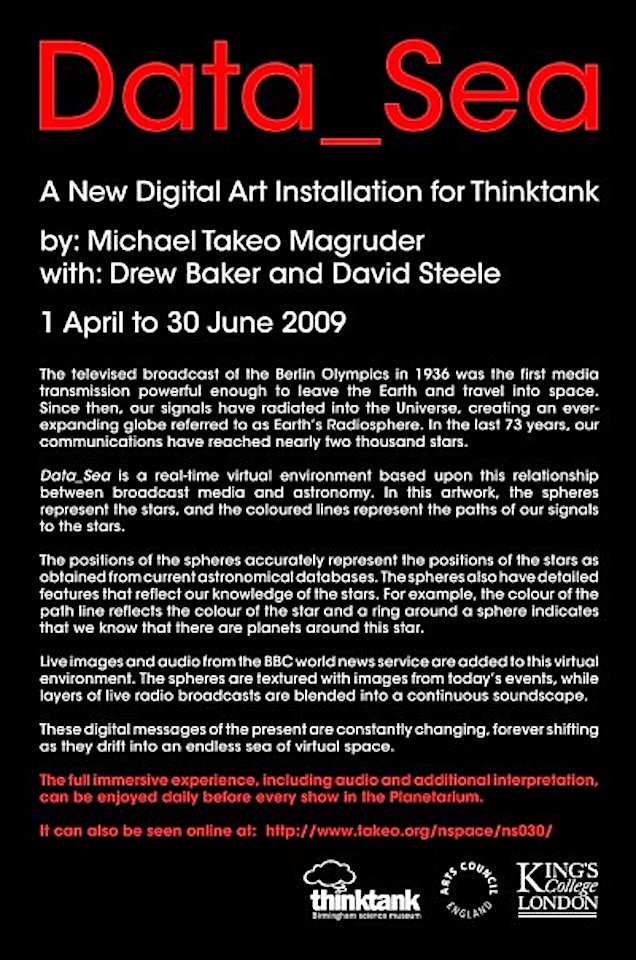 After I left Thinktank in September 2013, I continued to collaborate with Michael Magruder and he produced Data_Sea v2.0 (compatible with updated astronomical data and adapted for projection in portable domes utilising a spherical mirror). It premiered in one of my mobile domes at the Victoria and Albert Museum (London) on 21 September 2013, and was also exhibited at EVA London 2014 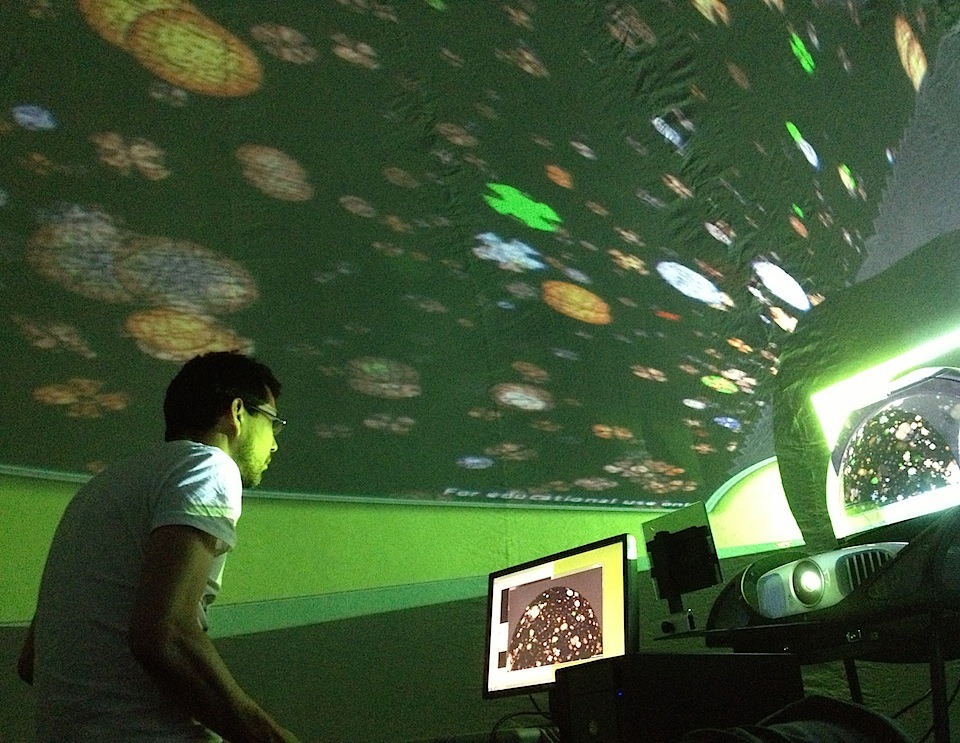 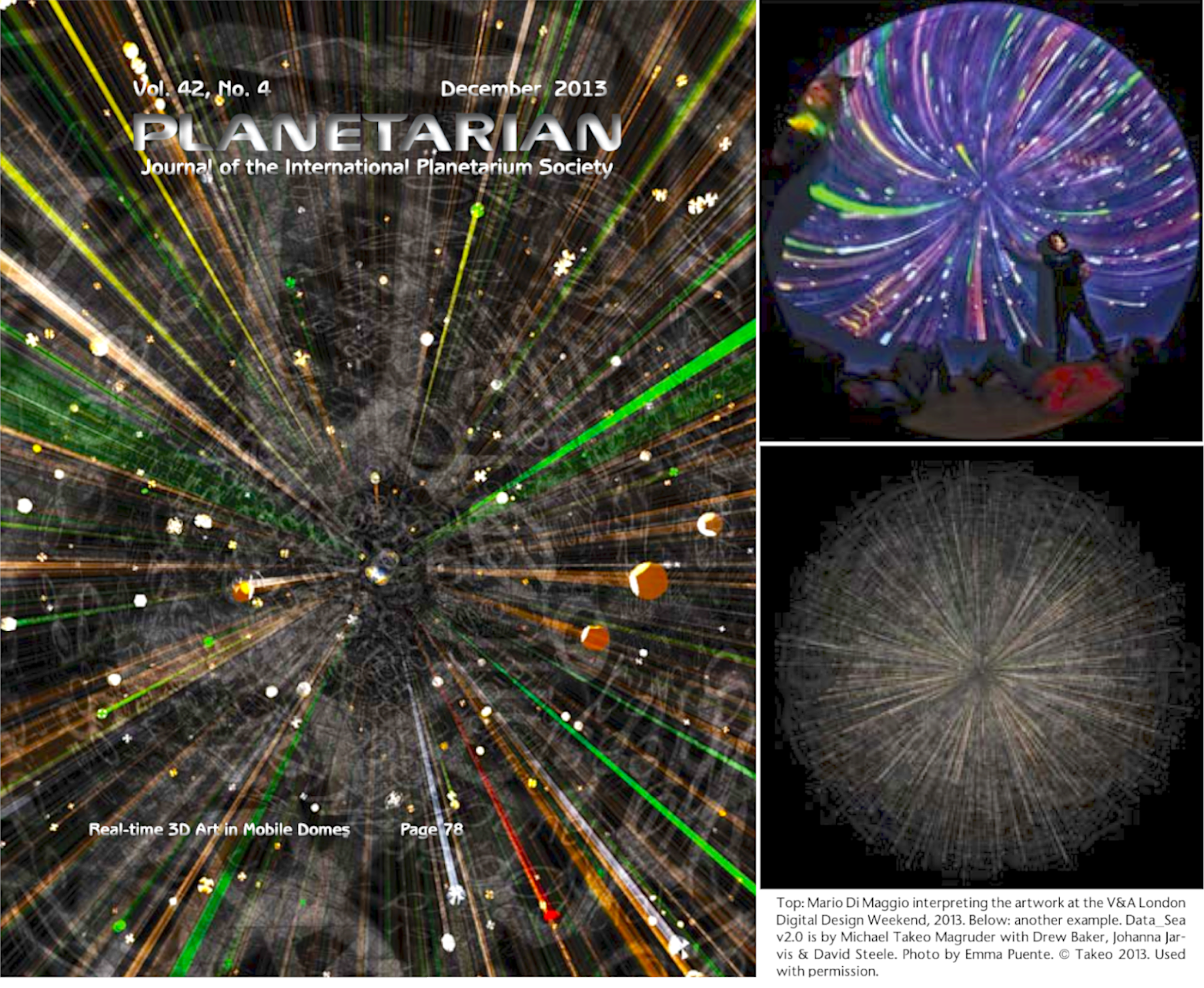 Despite misgivings from Thinktank Museum management and non-planetarium staff, Data_Sea proved popular with museum visitors and this was borne out by extensive independent evaluation.
I created easy-to-digest graphics of the evaluation results, and made the reports available on the Museum intranet for sceptical colleagues to read. Yet it was all completely ignored by management colleagues who were against the idea of art in a science museum. I discovered that despite all the noise museums make about the importance of visitor research, evaluation results are only acknowledged and acted upon when they agree with the thinking of those in power.

The amusing thing is that the planetarium corridor that became the SciArt Gallery (never officially called that by the Museum), had from the beginning been designed as a gallery space to exhibit 'space art' / 'SciArt' in the form of Hubble Space Telescope images 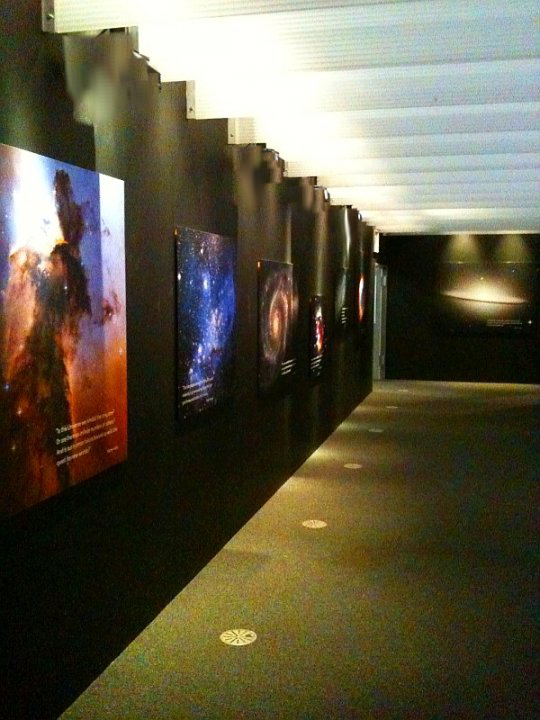 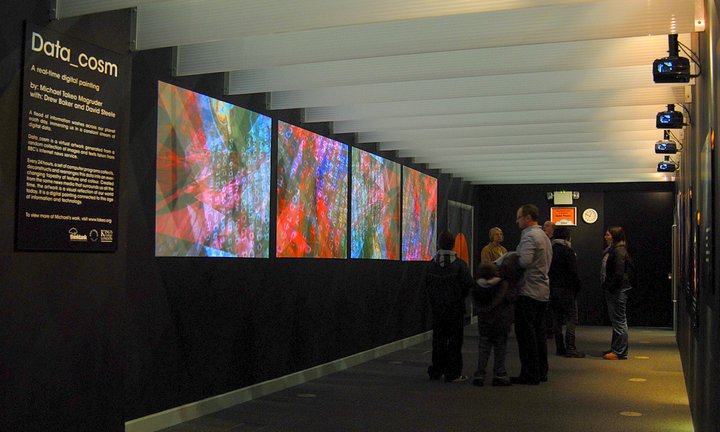 Yet sadly SciArt was never allowed to flourish at Thinktank Science Museum, even with my many perfectly sound audience development plans and with the promise of regular funding from Arts Council England at a time of diminishing budgets.

Nevertheless, it was a privilege to have spearheaded a progressive initiative emulating the leading science museums of the world.