[LinkedIn post I published in June 2020 during the pandemic, while starting up my Honeycomb Dome sales venture]

Would you deliberately walk on fire? Can you imagine yourself walking barefoot across a bed of coals glowing at 500ºC? I’ve done just that (see me in the red shirt below) - but was it a religious rite, motivational seminar or science experiment?

For me it felt like a science experiment. Yet I found it VERY empowering.

I was manager of the Glasgow Planetarium (you can see the dome behind me) and the company we booked for the charity fundraiser emphasised the scientific aspect of walking on fire and not the more popular woo-woo nonsense.

So, if it was carefully explained to you why skin doesn't burn over short fire walks of 3 to 4 meters, would you attempt it?

Fire walking is popular because it helps us realise many of our beliefs are self-limiting ie.

🔥 if you believe the coal will burn you, you will never walk on fire
🔥 if you believe it’s necessary to conform to society’s expectations, you’ll never do anything positively disruptive with your life
🔥 if I believe I can only earn a living visiting schools, I won’t succeed selling social distancing domes to restaurants during pandemics.
I’d LOVE to know: 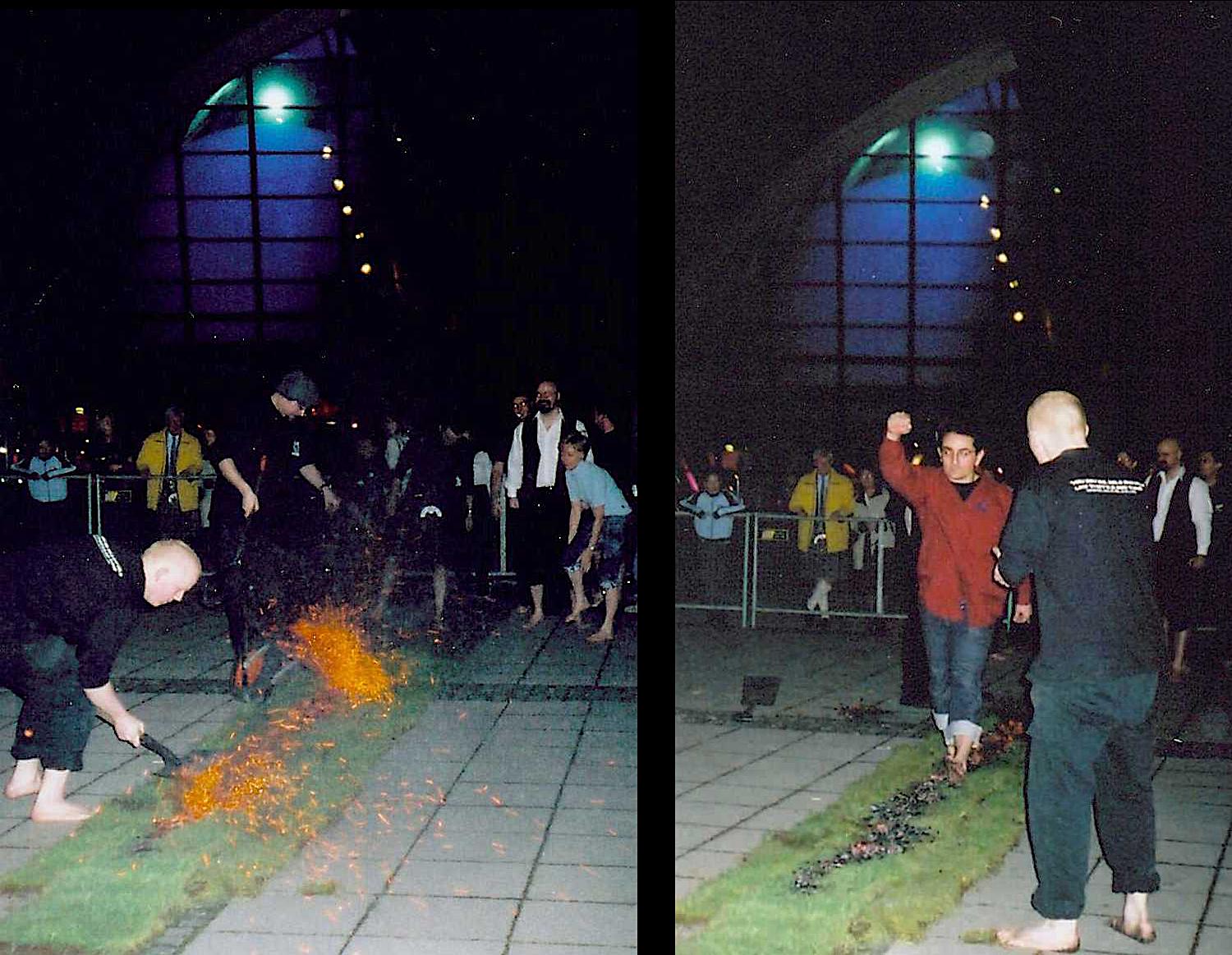 On 20 October 2018 a colleague and I delivered a double dome immersive experience at the Royal Academy of Arts (London), for an evening event called Cosmic Ocean. 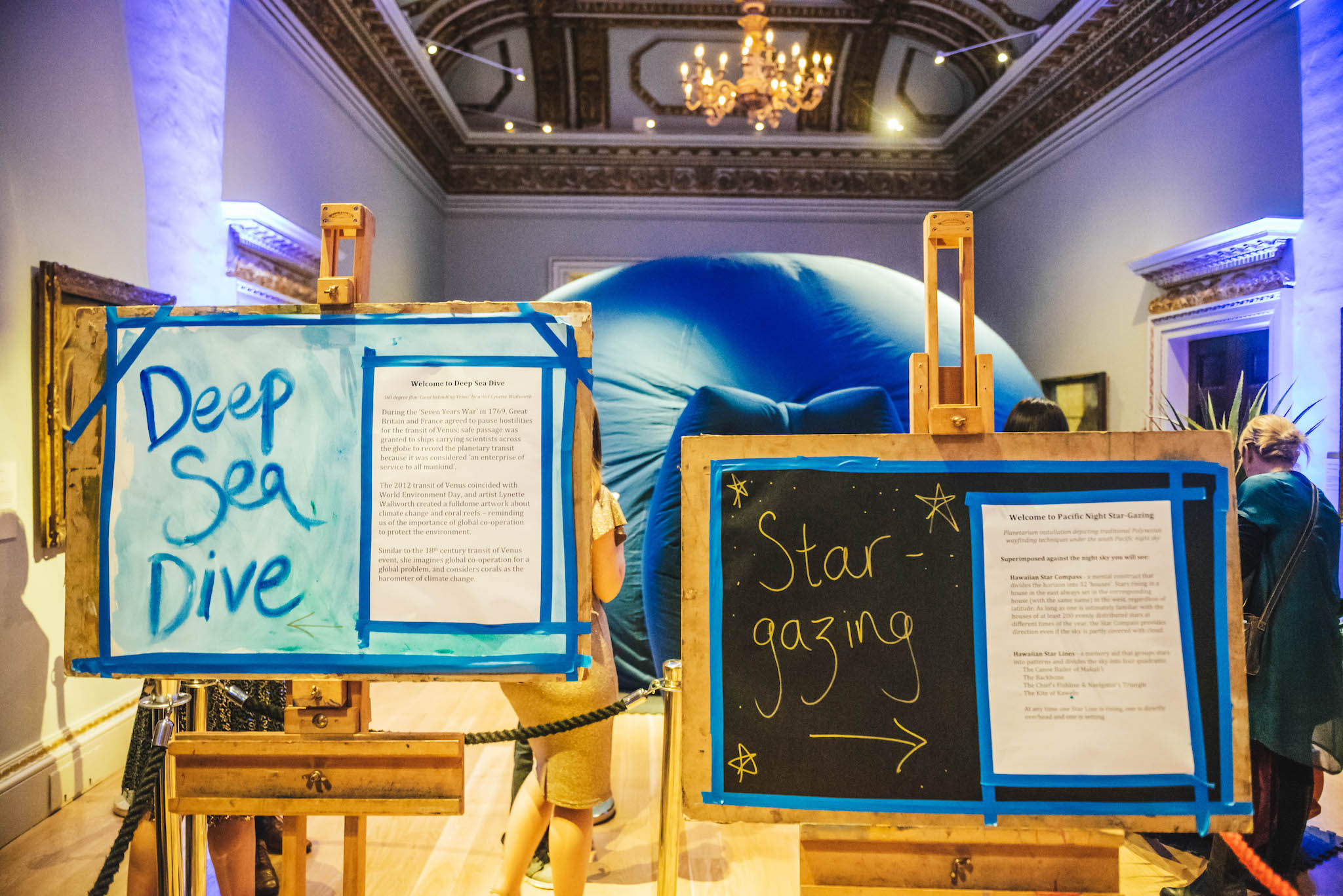 The Royal Academy of Arts is based in Burlington House, Piccadilly - which is also the home of the Linnean Society (established 1788), a learned society dedicated to the study of natural history and taxonomy.

Our domes were set up in the Reynolds Room, where, on 1st July 1858, research papers by Charles Darwin and Alfred Russel Wallace were presented, and the world first heard about the origin of species by natural selection.

When I saw the commemorative panel in the room I couldn't believe my eyes (and my luck!), and photographed it with one of my projection boxes in front of it. 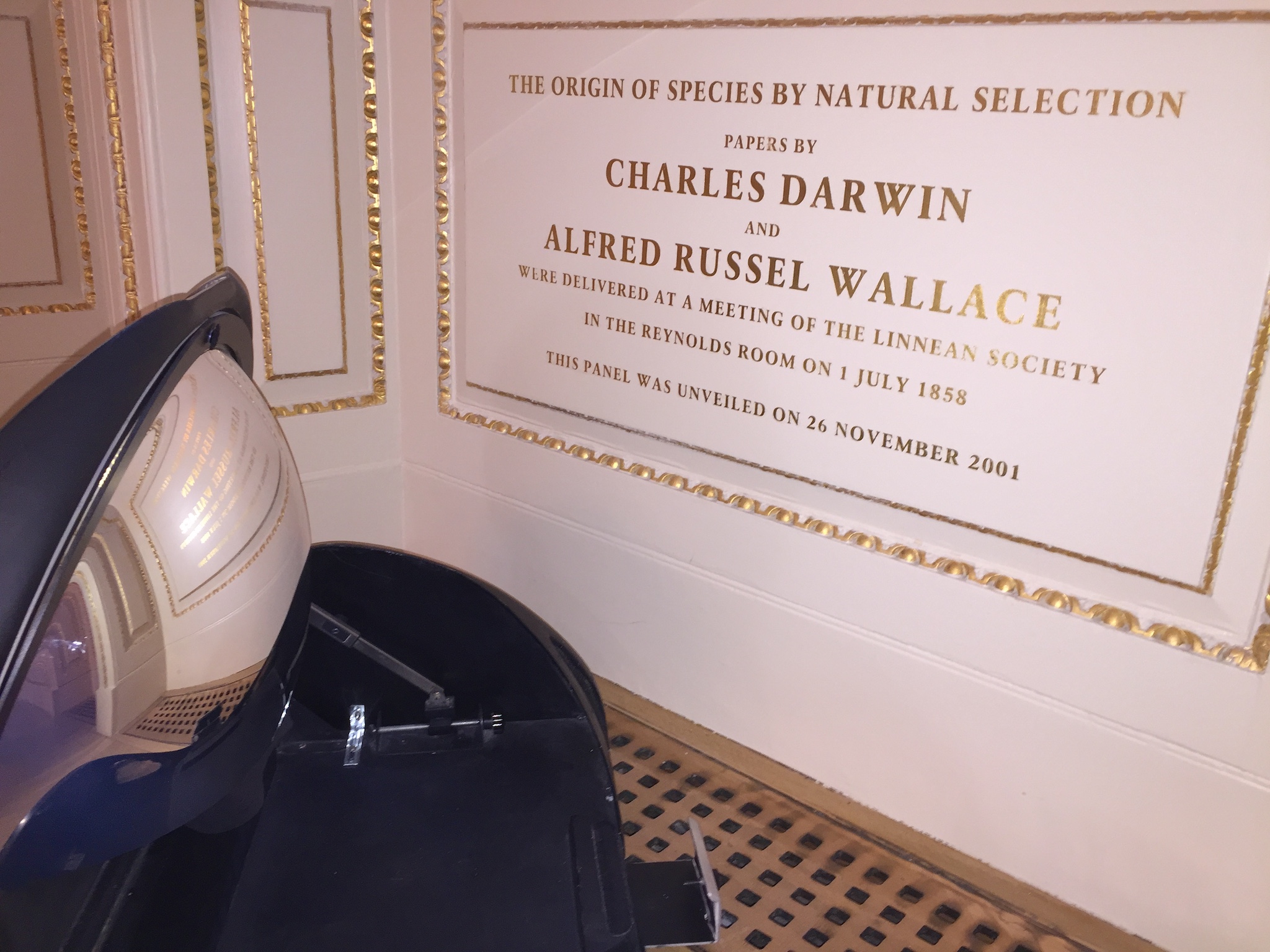 Interestingly, botanist and explorer Joseph Dalton Hooker (who was present when the papers were delivered) wrote that after the presentation 'the room was awestruck and completely silent, with a lack of discussion about the papers, possibly due to the subject being too novel and ominous'.

Even more interesting, the president of the Linnean Society at the time clearly had no idea what momentous changes this discovery would bring, writing in his annual review: "The year which has passed ... has not, indeed, been marked by any of those striking discoveries which at once revolutionise, so to speak, the department of science on which they bear."

How astounding that visionary, brilliant people are so often not appreciated by those around them at the time. 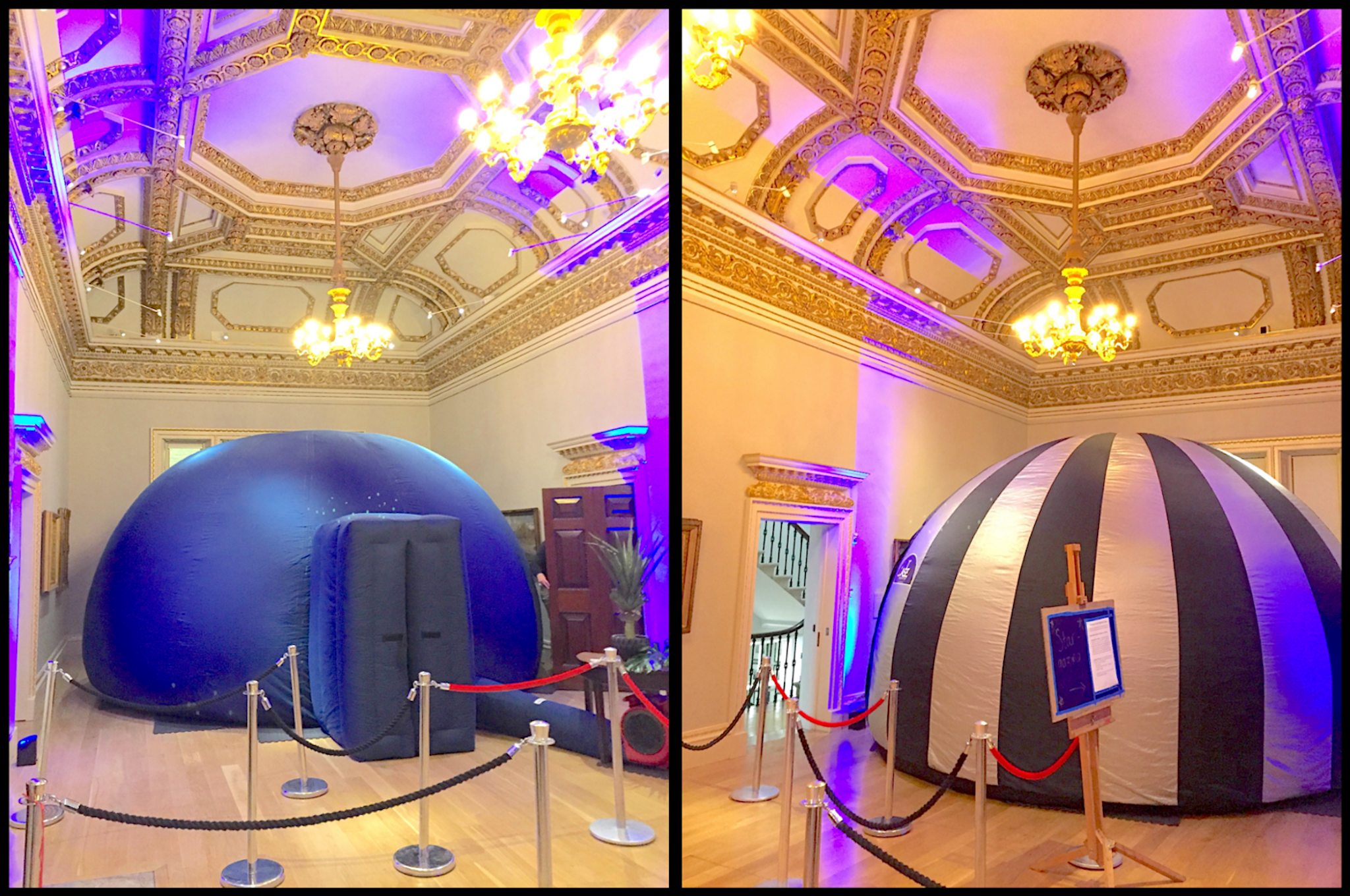 On the evening of 5th November 2009, I suffered a 'fatal heart attack' and a public 'autopsy' was performed on me in the Royal Institution Lecture Theatre (London) - the prestigious auditorium where Michael Faraday first demonstrated electromagnetism (1831) and where the annual Christmas Lectures have been held since 1825. 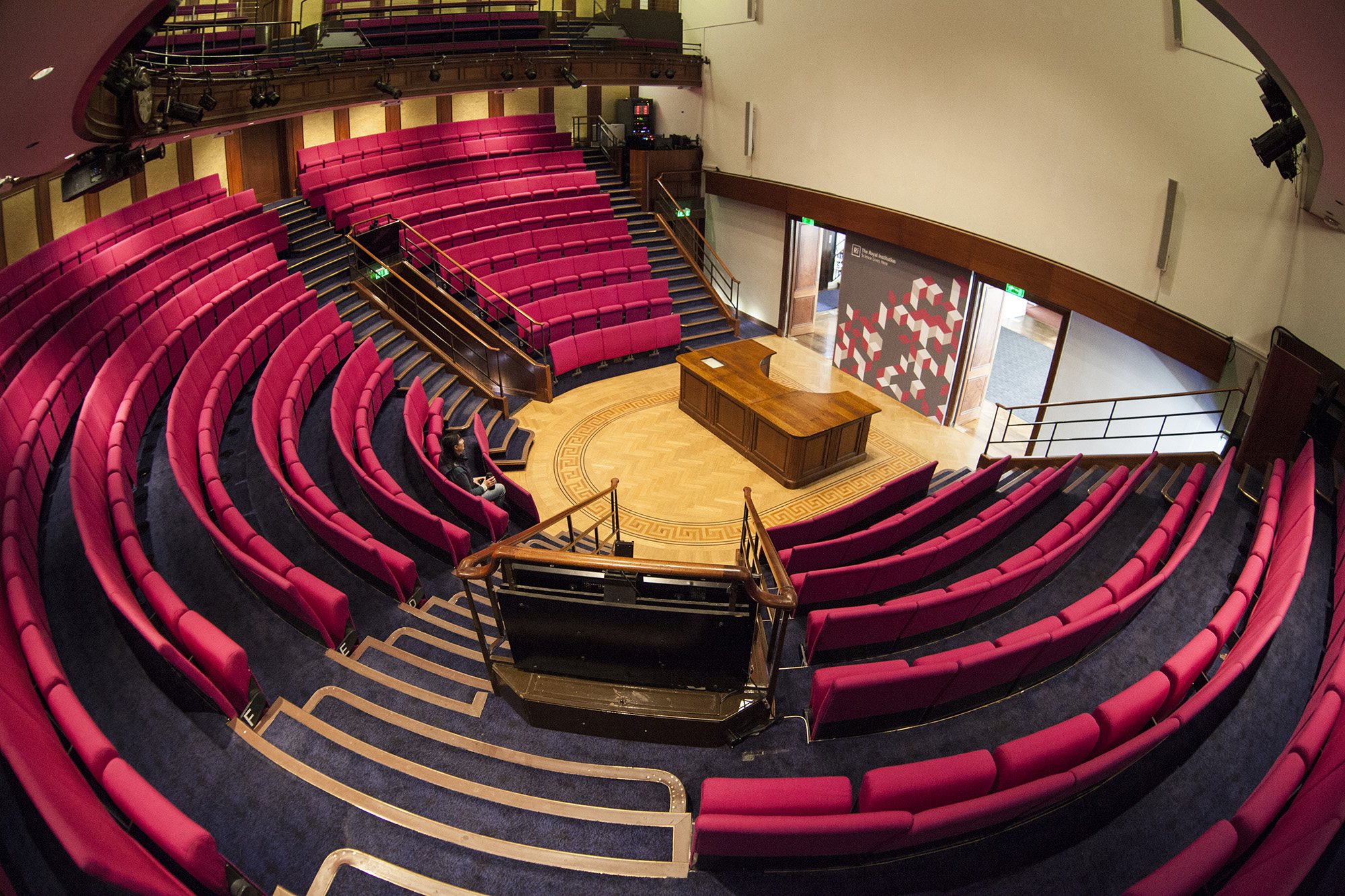 My wife Ruth was Public Engagement Manager at the Royal College of Pathologists, and I had volunteered to be the 'cadaver' at a special National Pathology Week event involving a mock autopsy. It was called Heart Attack: Behind the Scenes, was held in partnership with the British Heart Foundation, and after my mock autopsy it included the dissection of a real pig's heart. 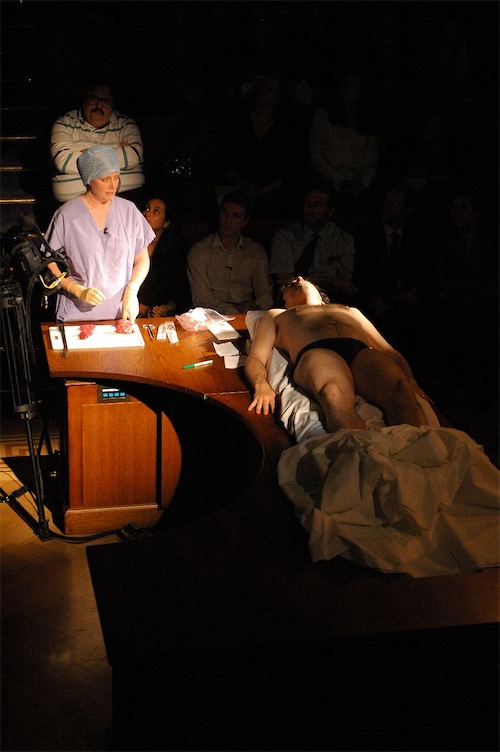 By now I had become quite good at lying perfectly still for an hour or more (while having my body drawn on with coloured markers). Ruth had launched the very first National Pathology Week the year before, and so I'd experienced a number of 'autopsies' at the hands of various pathologists around the country before this particular event. 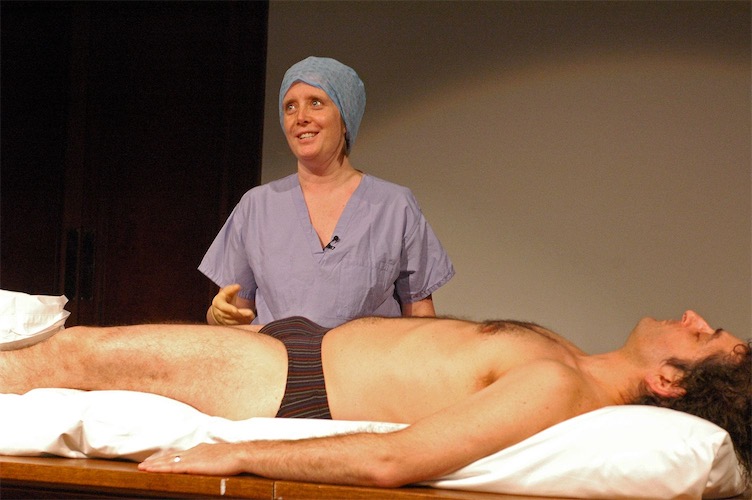 The secret to lying perfectly still is to 'zone out' and either focus intently on the lecture, or something else altogether (while keeping away from certain topics of course). The most challenging part is ignoring dozens of imaginary (and occasionally not-so-imaginary) itches and prickles that clamber for attention.

The following year I performed at another unique venue, London's Old Operating Theatre, Britain's oldest operating theatre dating back to 1822. As you can see from the feedback, apparently I was uncannily convincing as a corpse. 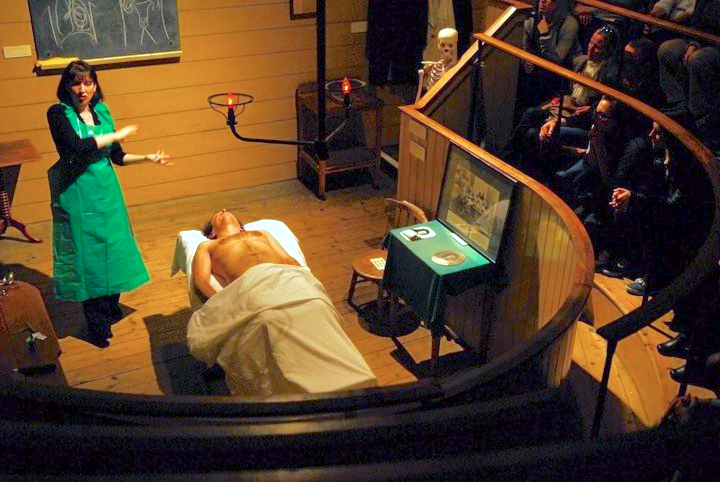 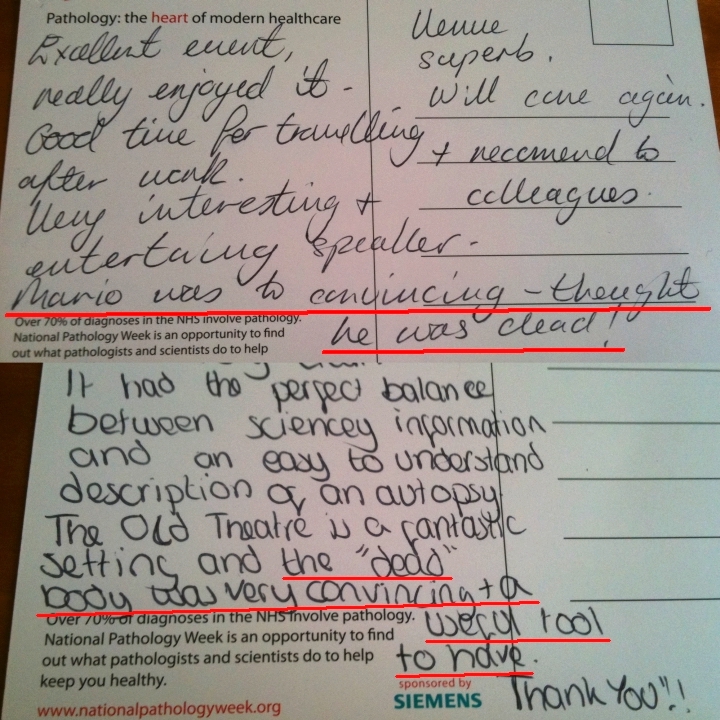 Sharing a Stage with my Heroes

In June 2006 I was invited to be a speaker on the Tea, Talk and Telescope lecture series, hosted by the School of Physics and Astronomy of the University of Birmingham.

I delivered an illustrated presentation about aliens, sceptical thinking and astrobiology, called Aliens on Earth. I developed this talk while at Armagh Planetarium and had presented it a number of times before. Sceptical thinking and the possibility of extraterrestrial life have always been two of my greatest passions.

The Tea, Talk and Telescope lecture series ran from 2006-2014 and featured a number of academics and researchers I greatly admired - and even considered my heroes - like David Malin, Brian Cox, David H. Levy and Prof. John Brown.

In 1999, on making the decision to emigrate to the UK from South Africa, I very much looked forward to attending lectures by such people.

Therefore considering my humble origins, I never expected - only seven years later - to be sharing the stage with some of these renowned science communicators. 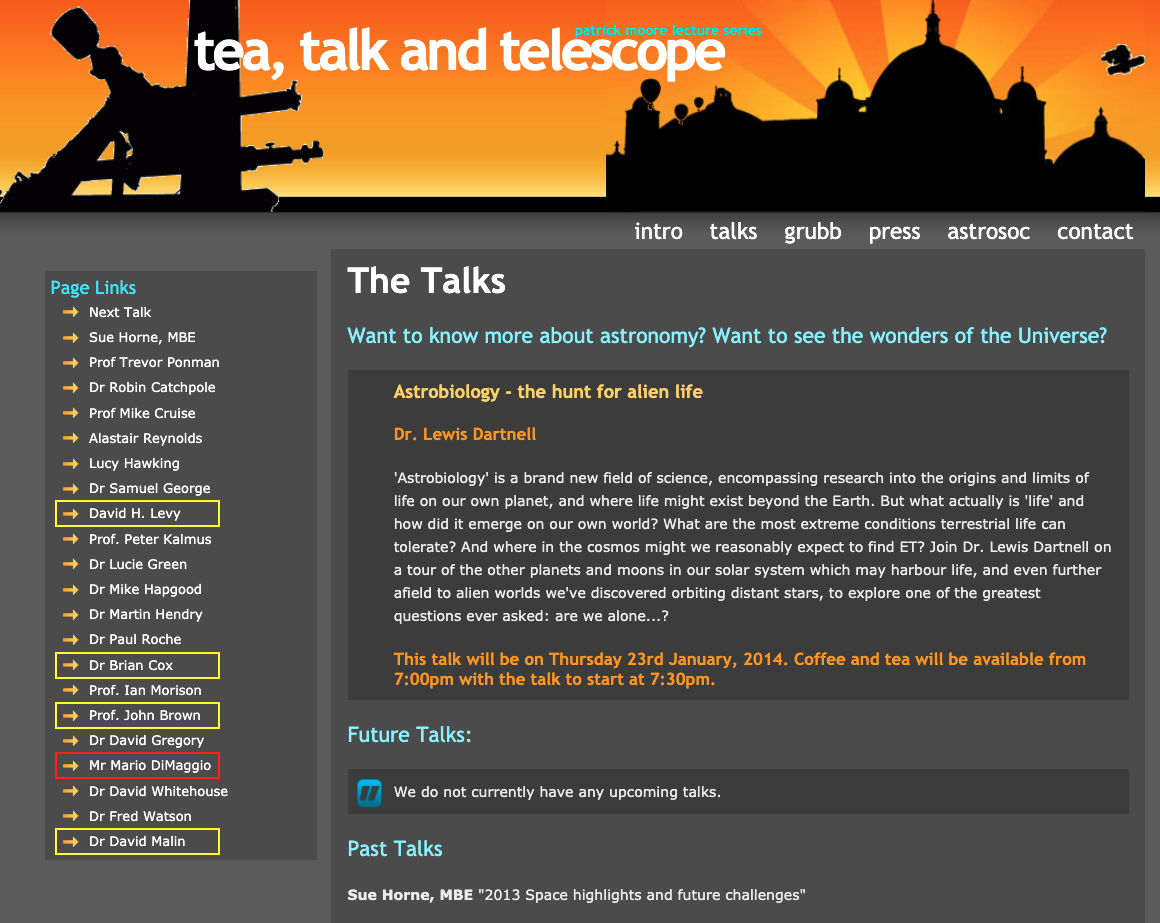 [Blog post I published at 21:30 on Saturday 30th December 2000, in Armagh, Northern Ireland]
Exactly one year ago, almost at this precise moment, the wheels of my Virgin Atlantic flight lifted off South African soil.

When that moment came, and I felt the thud of the undercarriage beneath me, I smiled and breathed a sigh of relief: I knew I had succeeded in finally leaving that unfortunate, deteriorating country - safe and in one piece.

Yet I also knew that a tremendous challenge lay before me. All on my own, I was entering a new, unfamiliar environment. A wintry world where I spoke funny and felt awkward and uncomfortable.

The first two weeks were the worst. The very first entry in my 2000 diary reads: "Went to bed in a bit of a panic...asking myself 'what have you done to your life?'".

Traveling to and from work on a bicycle in the middle of winter during my first three months in the UK was no joke either. Yet I stuck it out, marking days off my calendar until things improved.

I'm really glad I didn't throw in the towel.

And tonight, sitting in my comfortable warm room, with the snow lying thick outside, I can't believe that my diary once again reads 30th December ... and that Africa is far away."

My precious one-way ticket out:

Do I miss South Africa?

The security of quality health care : when I look at my ageing parents and notice how ill-health is creeping up on them, I no longer worry about where we'll find the money to take them to a private hospital (to avoid the pressing thousands of South Africans queuing at state hospitals).

No bugs : when I switch on the kitchen light, I no longer see cockroaches scurrying for cover (vermin that are always there, despite your best efforts to keep a clean home).

No danger : when I look out my bedroom window at night, I no longer see lurking people and threatening shadows in the dark. There is absolutely no-one around - only the occasional taxi that serves as transport for the neighbour across the way.

On the outskirts of the 1000-year old Sicilian village Piazza Armerina, there is a small olive grove called Sarafina. It is the oldest and only remaining plot of the once more extensive cultivated lands of the Di Maggio family. Many of the olive trees (heavily pruned in 1990) are hundreds of years old. 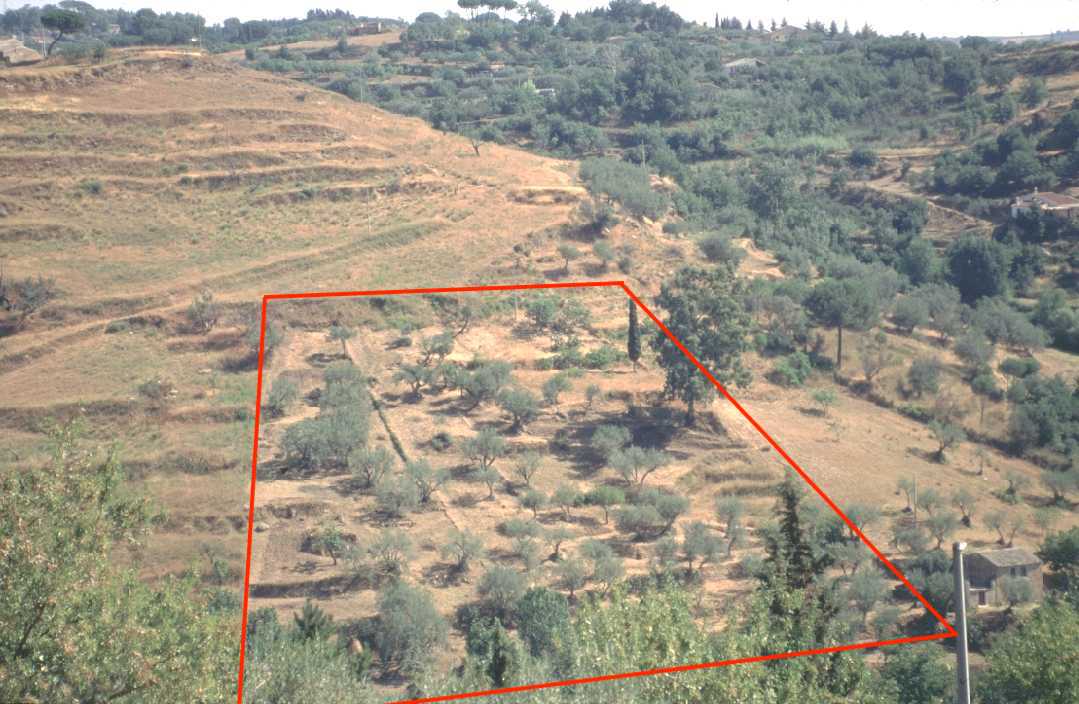 In August 1997, while on a family visit to Sarafina, I made a surprising discovery in one of the olive trees. Inside a knothole in a tree just to the left of the ruins of the old storehouse (below), something glinted in the sun. 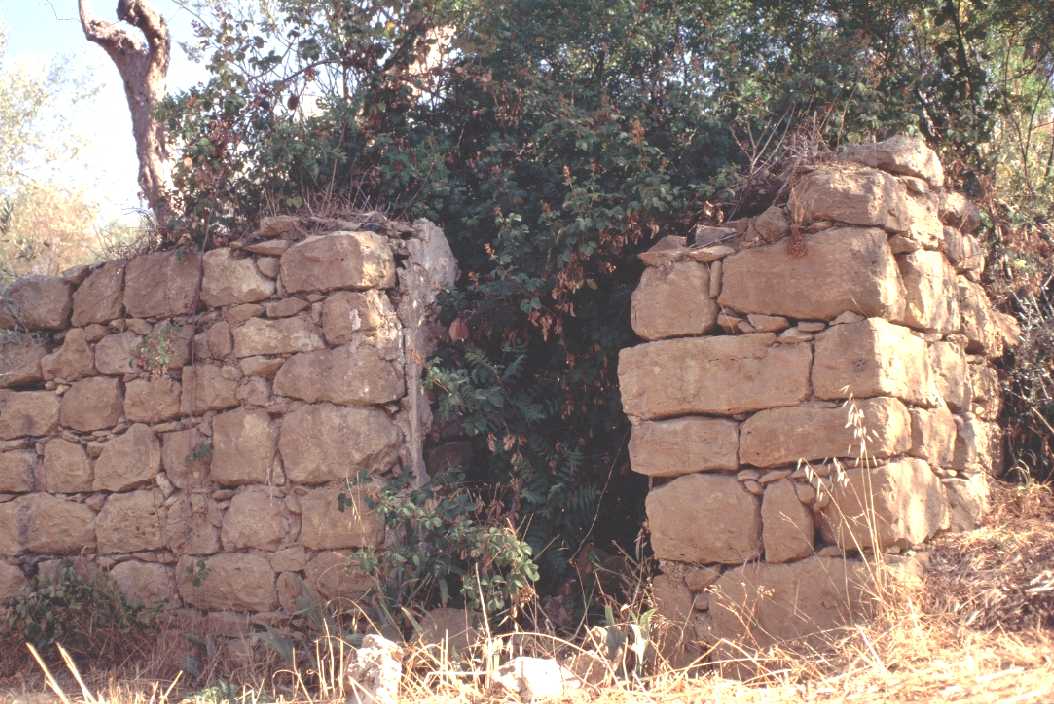 On investigating, I pulled out a large, rusty key. It turned out to be the long-forgotten storehouse door key, safe in its hiding place for over 50 years. 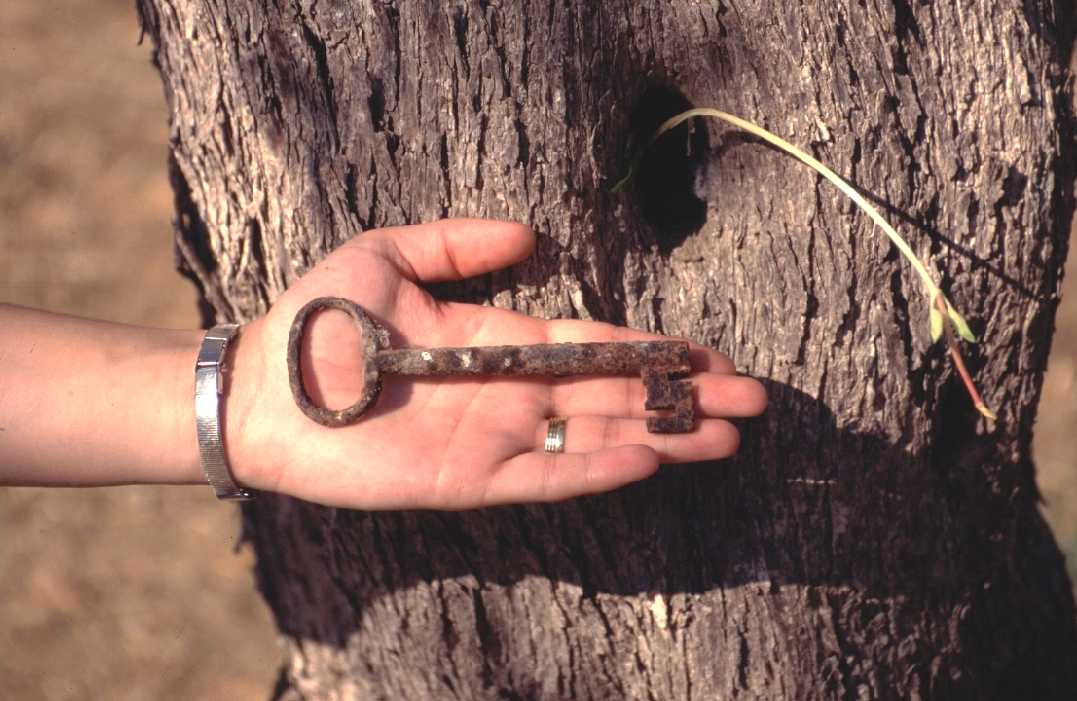 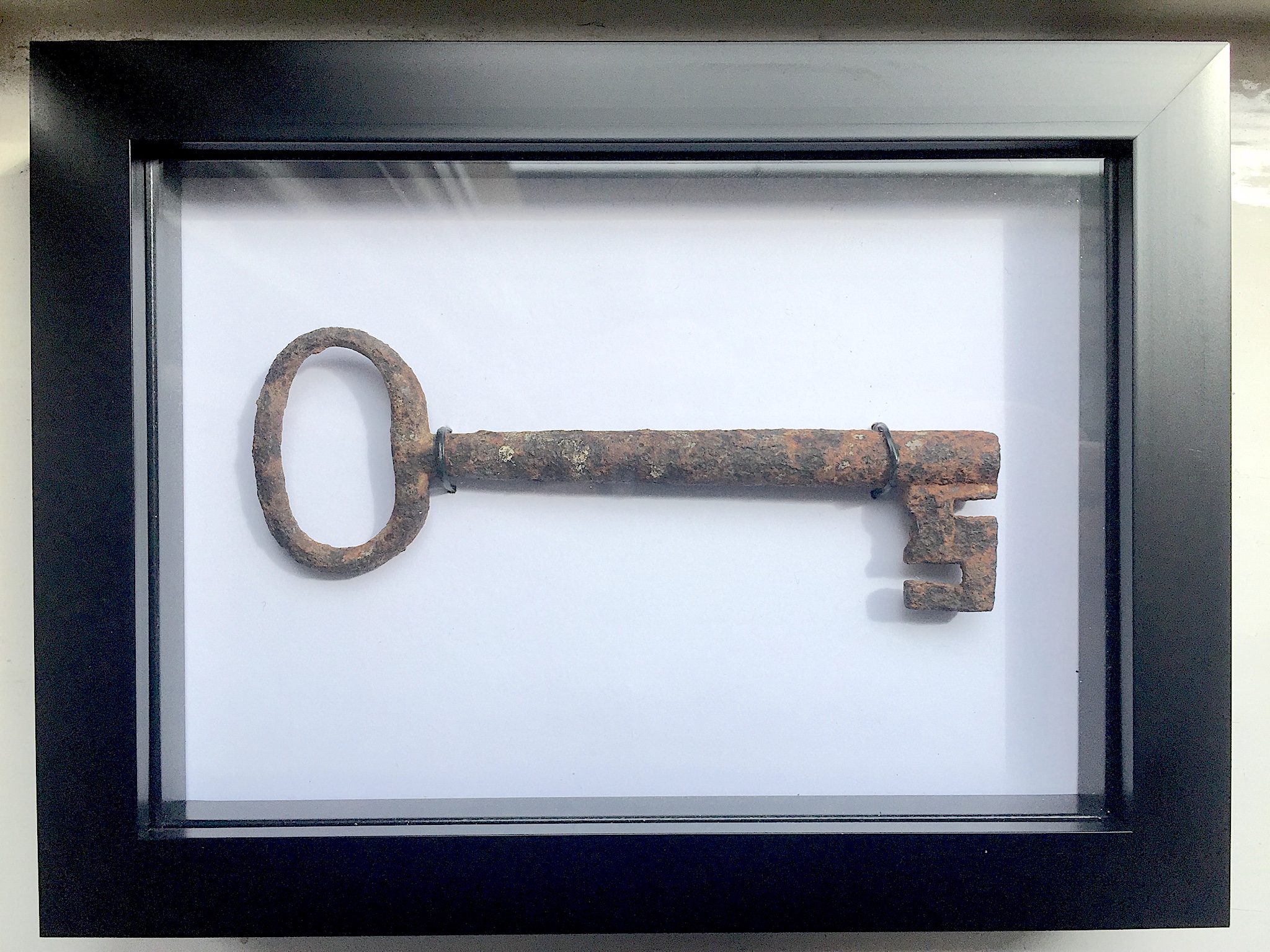 I worked hard and did well at school. It was a welcome escape from an unhappy life at home. I particularly enjoyed secondary school, an all-boys school (then) called Alexandra Boys' High.
Academically I wasn't naturally brilliant, and English was only my third language (on my first day at primary school, aged 6, I only knew two English words: 'sorry' and 'toilet'). Nevertheless, I was a dedicated student and surprised myself when I began doing well at secondary school - both academically and in sport (basketball).
In my final year I ended up being the school Dux (top academic pupil), and I had made the provincial basketball team.
I guess the most important thing I learned from my school career is that natural talent is not a requirement for success. Hard work and dedication can achieve the exact same thing.

(my name at school was Mariano instead of Mario - an error made by my parents [who didn't speak English] when they prepared my birth certificate. I had my name changed to Mario on my passport years later) 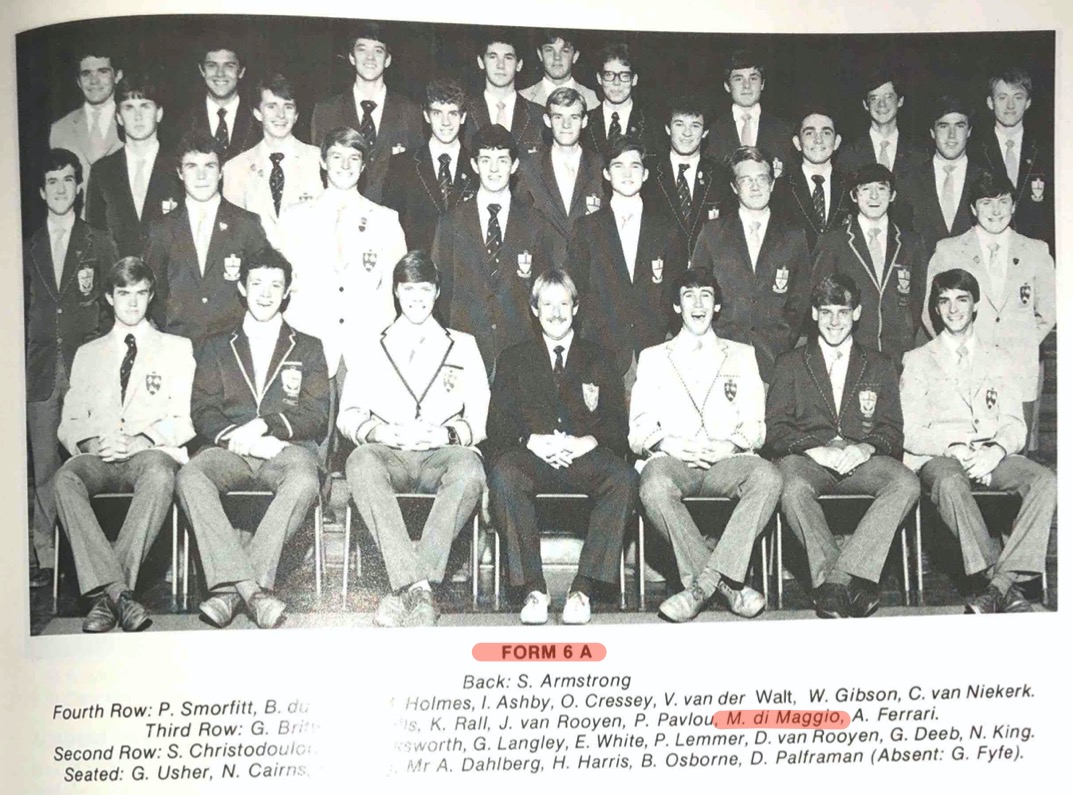 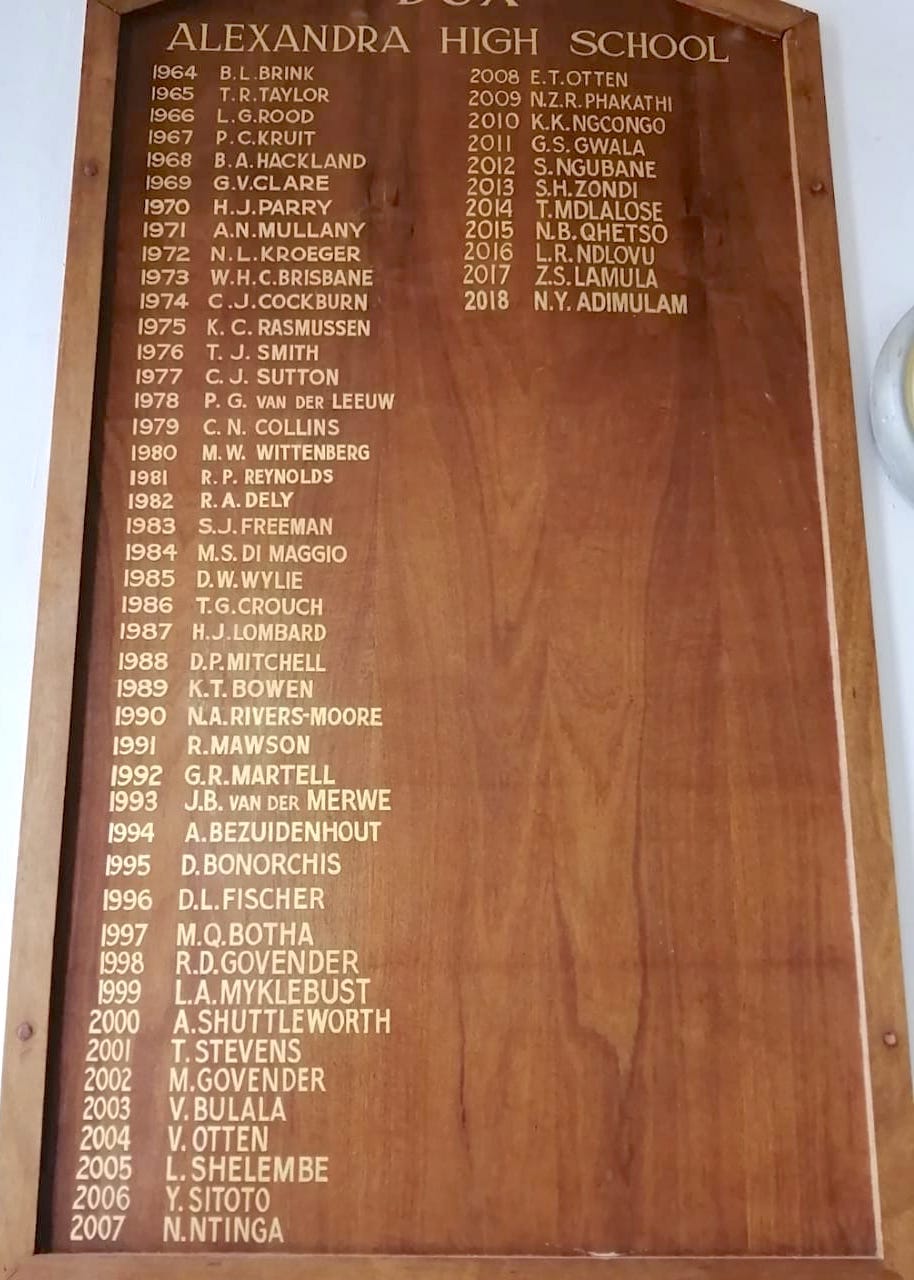