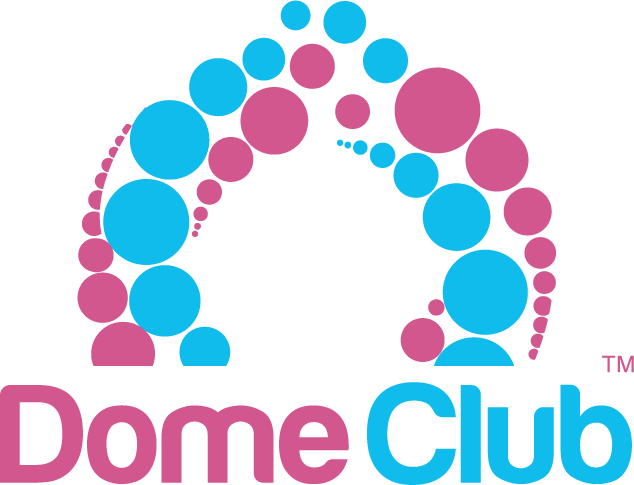 Dome Club is a 360° digital dome entertainment experience created by Mario Di Maggio in 2012 while manager of Thinktank Planetarium.

On being placed in charge of the UK's first purpose-built digital dome in 2006, aside from delivering standard planetarium content, Mario almost immediately began collaborating with artists to fully exploit the capabilities of the new fulldome medium.

His inspiration was the SATosphère (Montreal, Canada), and by the time Mario left in September 2013, Thinktank Planetarium had produced a significant amount of original creative content, including the invention of a new art form.

The name Dome Club was coined by DJ Food (Kevin Foakes) after he visited the planetarium in June 2012 to experience the 360° cinema for himself. He was so impressed by what he saw he was inspired to create a 50 minute fulldome 'music video' for his album The Search Engine.

Kevin Foakes allowed Mario to keep the rights to the name Dome Club, and Mario trademark registered the name in November 2013. 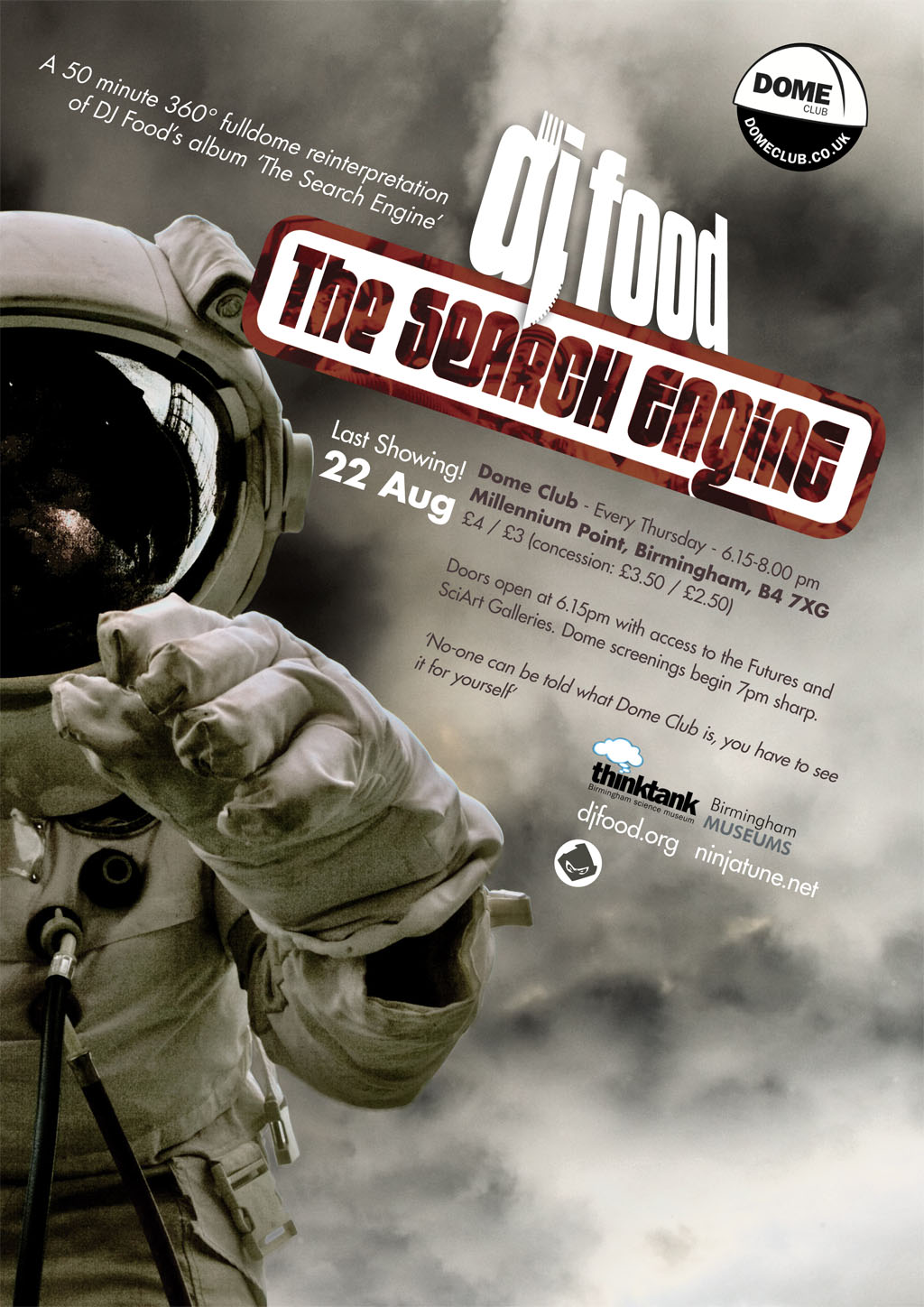 The Dome Club experience started coming together in earnest in 2011, a watershed year for Thinktank Planetarium.

In March 2011 we hosted the 2nd UK Fulldome Film Festival (aka Fulldome UK), in May we began regular screenings of Pink Floyd - The Fulldome Experience, and in October we put on the first Domeheads Tripnotic event. 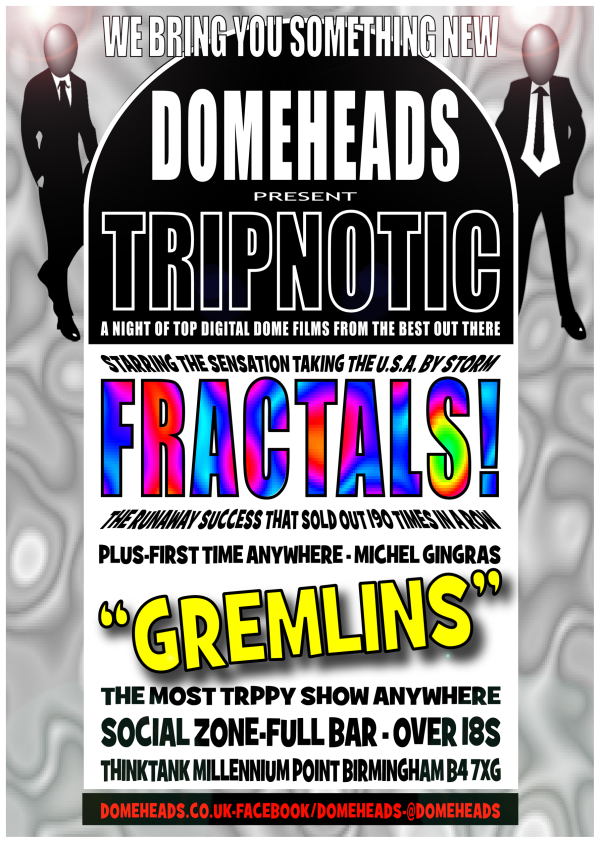 Dome Club events took place in the evenings and attracted new audiences to the museum. We made available free training for fulldome content creation and loaned the planetarium fisheye camera to enthusiasts. User-generated content was projected on the dome at every event, as well as student work from Birmingham City University next door. We screened content from international fulldome festivals and progressive digital domes around the world, and ended each evening with a full-length creative 360° film.

Below a few of the weekly Thinktank Dome Club programme leaflets, including the penultimate one censored by management. 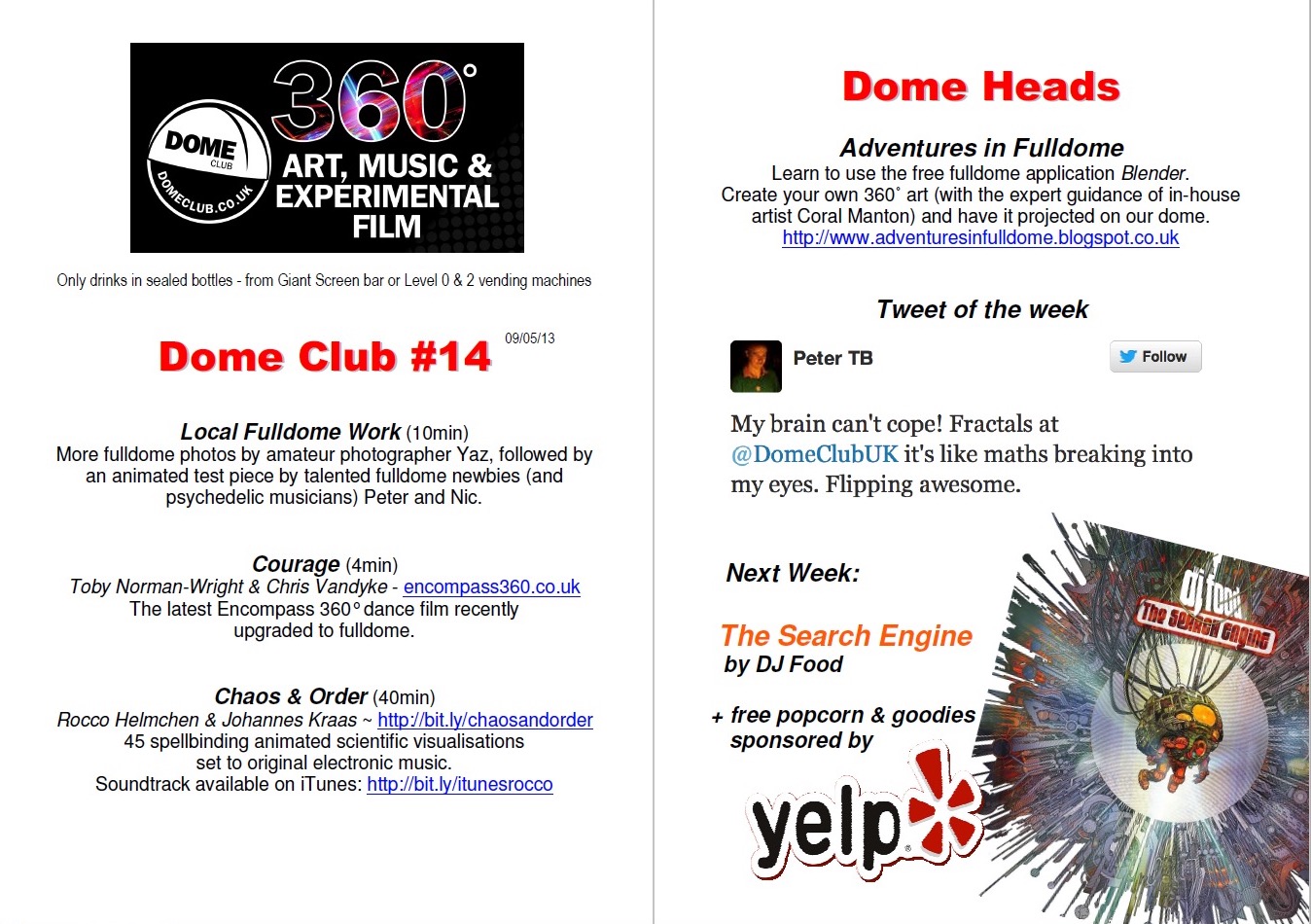 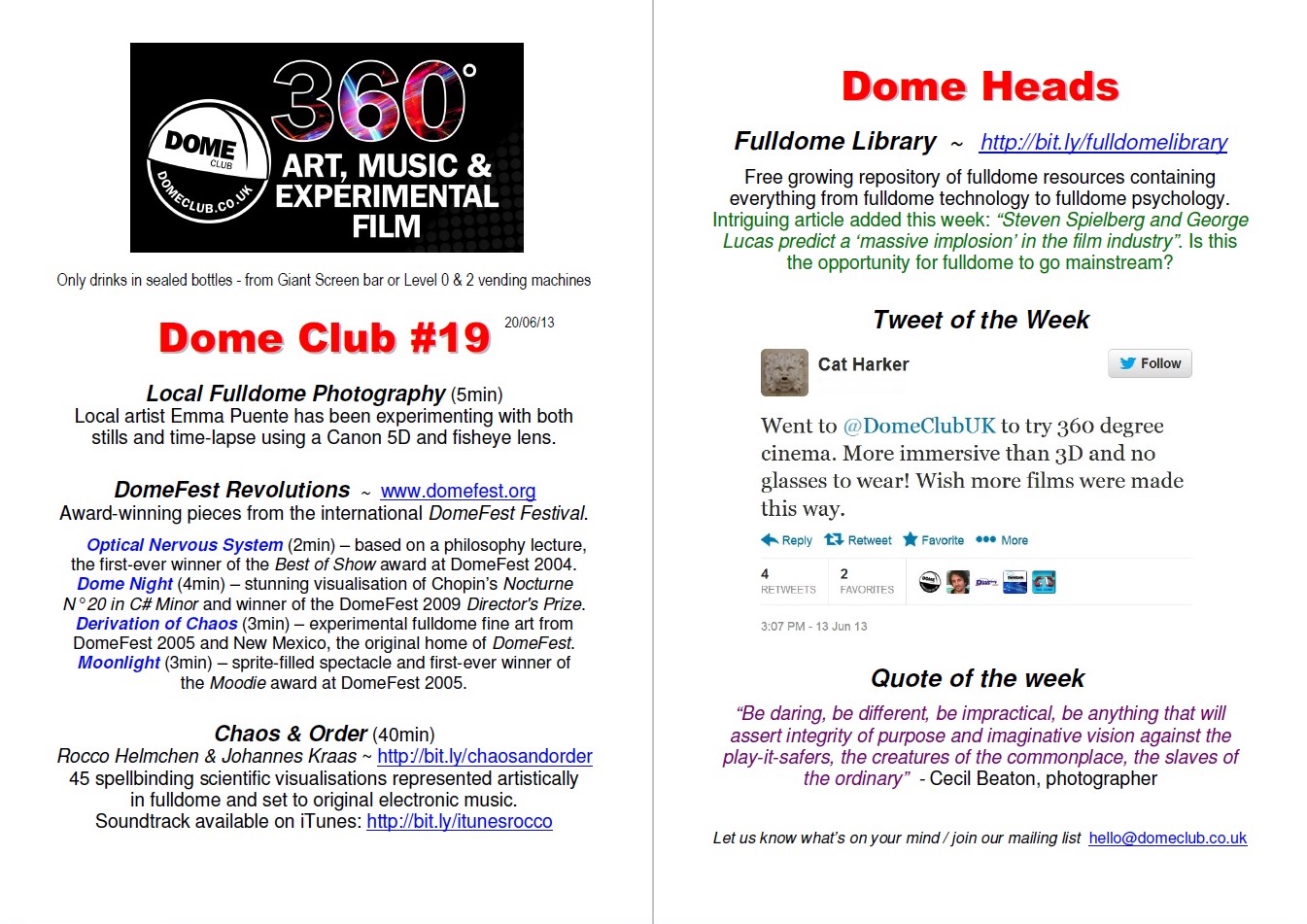 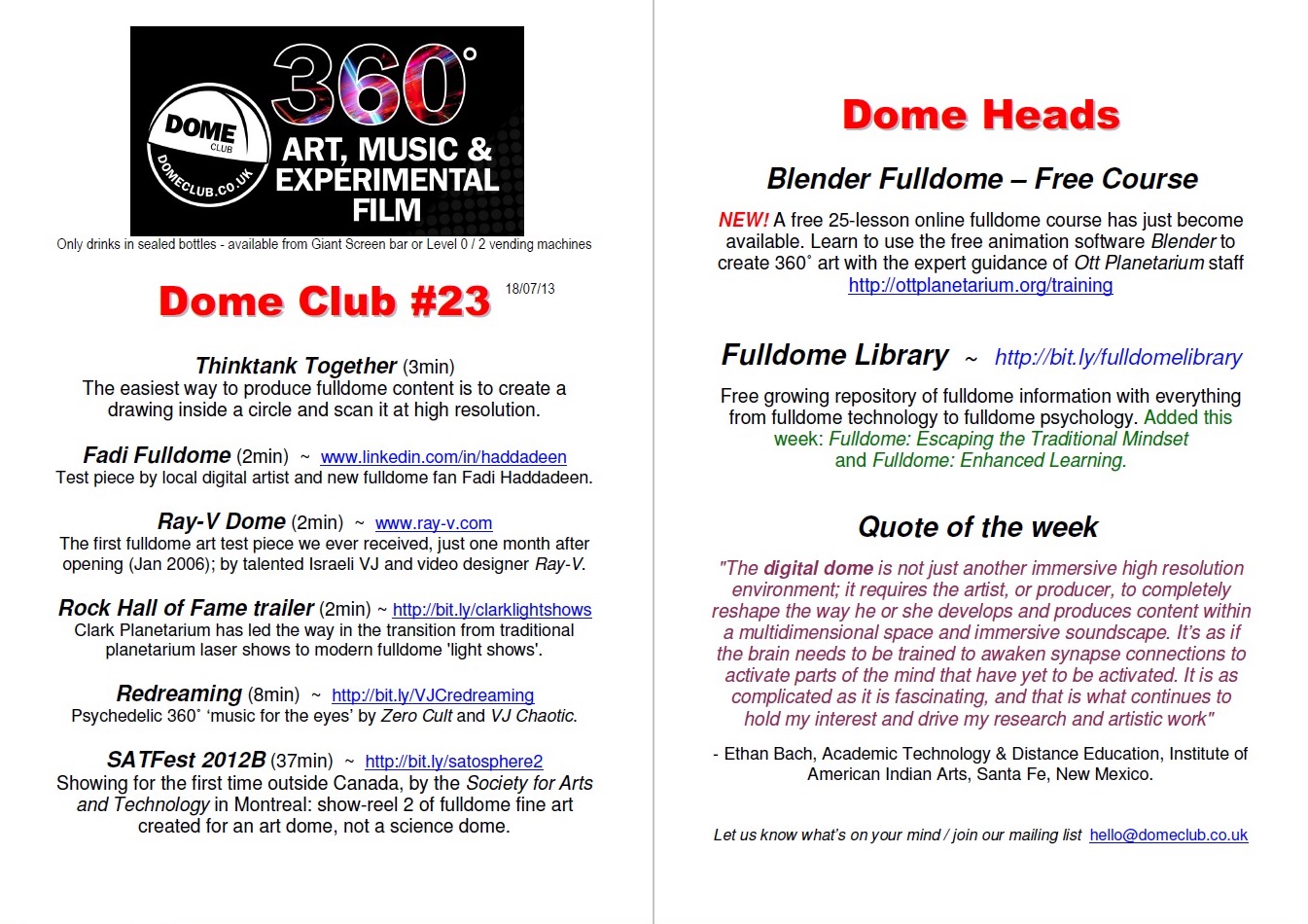 In the penultimate leaflet I referred to an article called 'People are biased against creative ideas', from the journal Psychological Science. Yet on getting wind of this, Thinktank management prohibited me from publishing it. 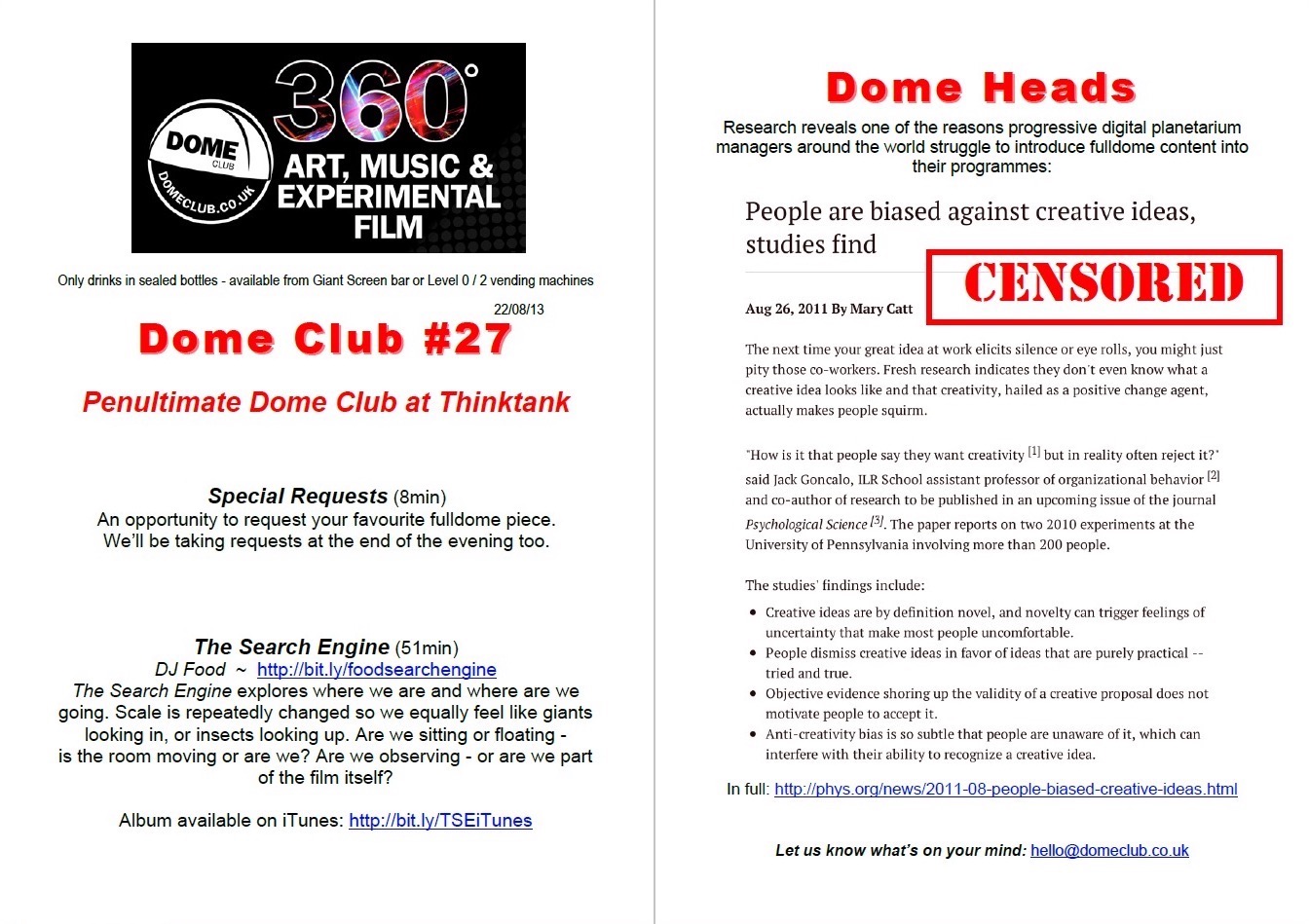 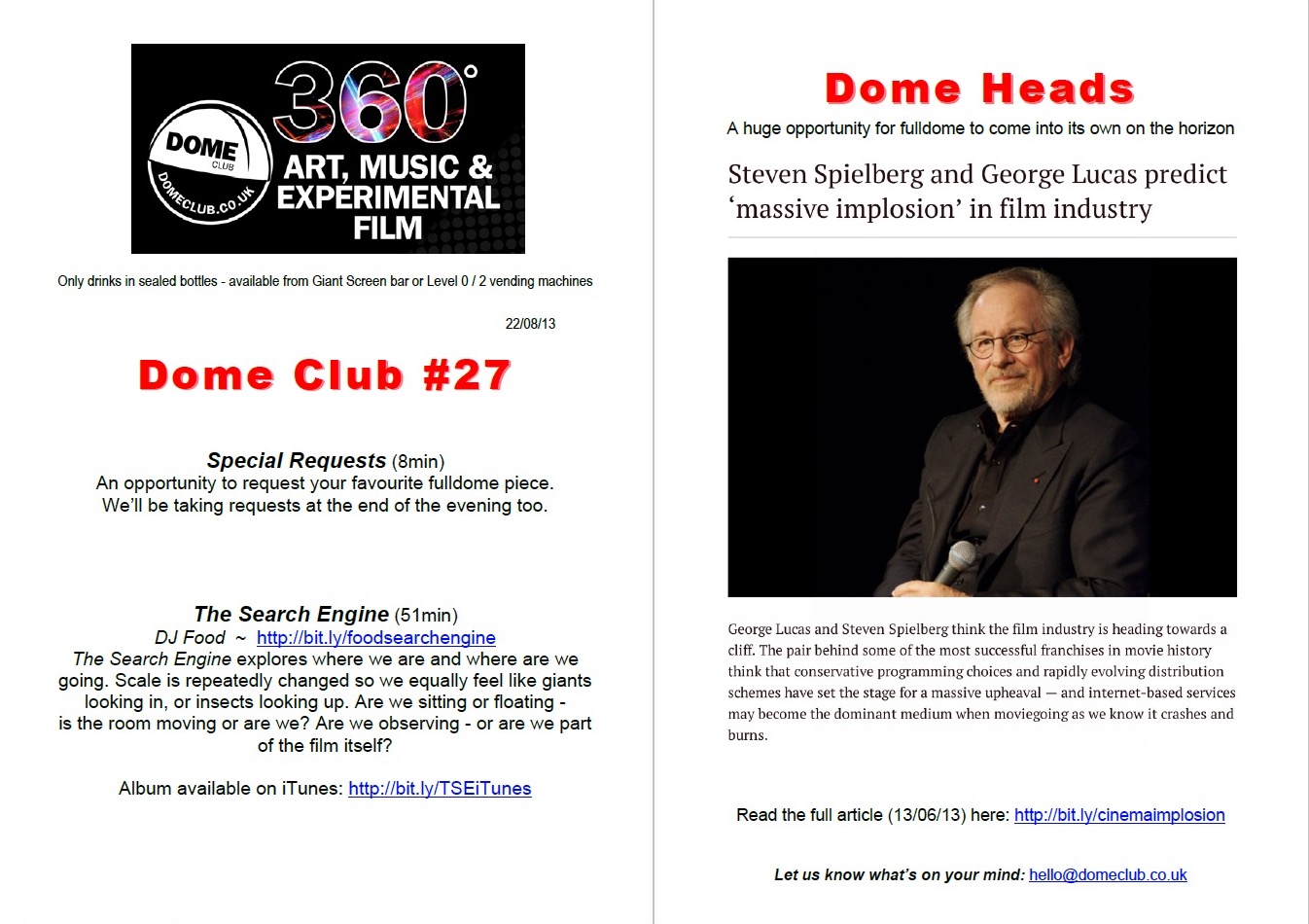 By mid-2013 Dome Club had captured the attention of local Arts Council England (ACE) officials, and the local ACE Dance, Digital and Museum Relationship Managers each came along to experience the event for themselves. They were impressed and supportive, and encouraged Mario to apply for significant ACE funding to help establish Dome Club as a permanent fixture at the museum, including the creation of a separate branded planetarium entrance on the third floor.
By now Dome Club had become the eighth most popular Birmingham visitor attraction on TripAdvisor 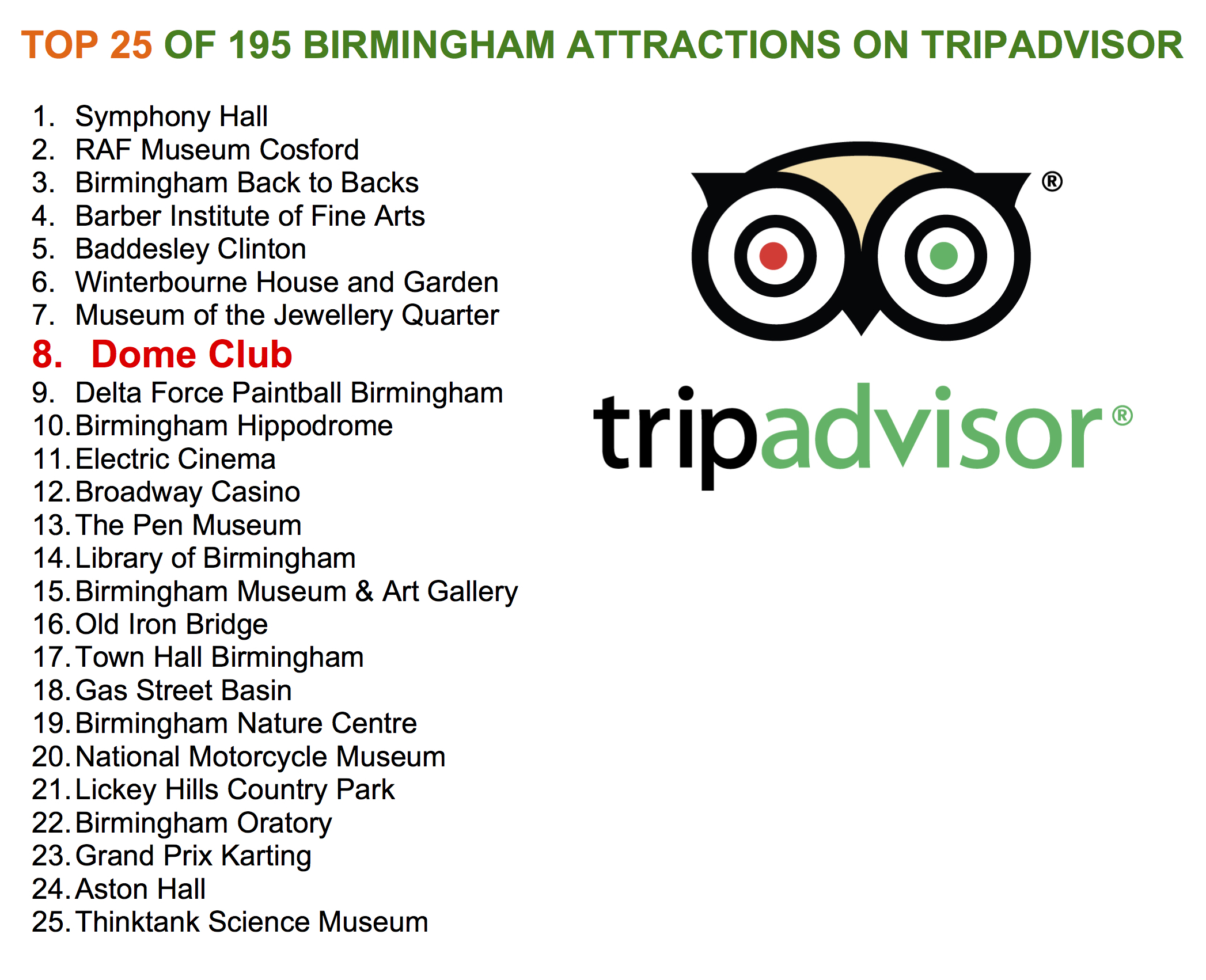 Yet instead of embracing this unique opportunity - and despite Thinktank Museum being in dire need of 'alternative income streams via entrepreneurial initiatives' - in September 2013 Thinktank management chose to disband the planetarium team and make Mario and one of the two presenters redundant. 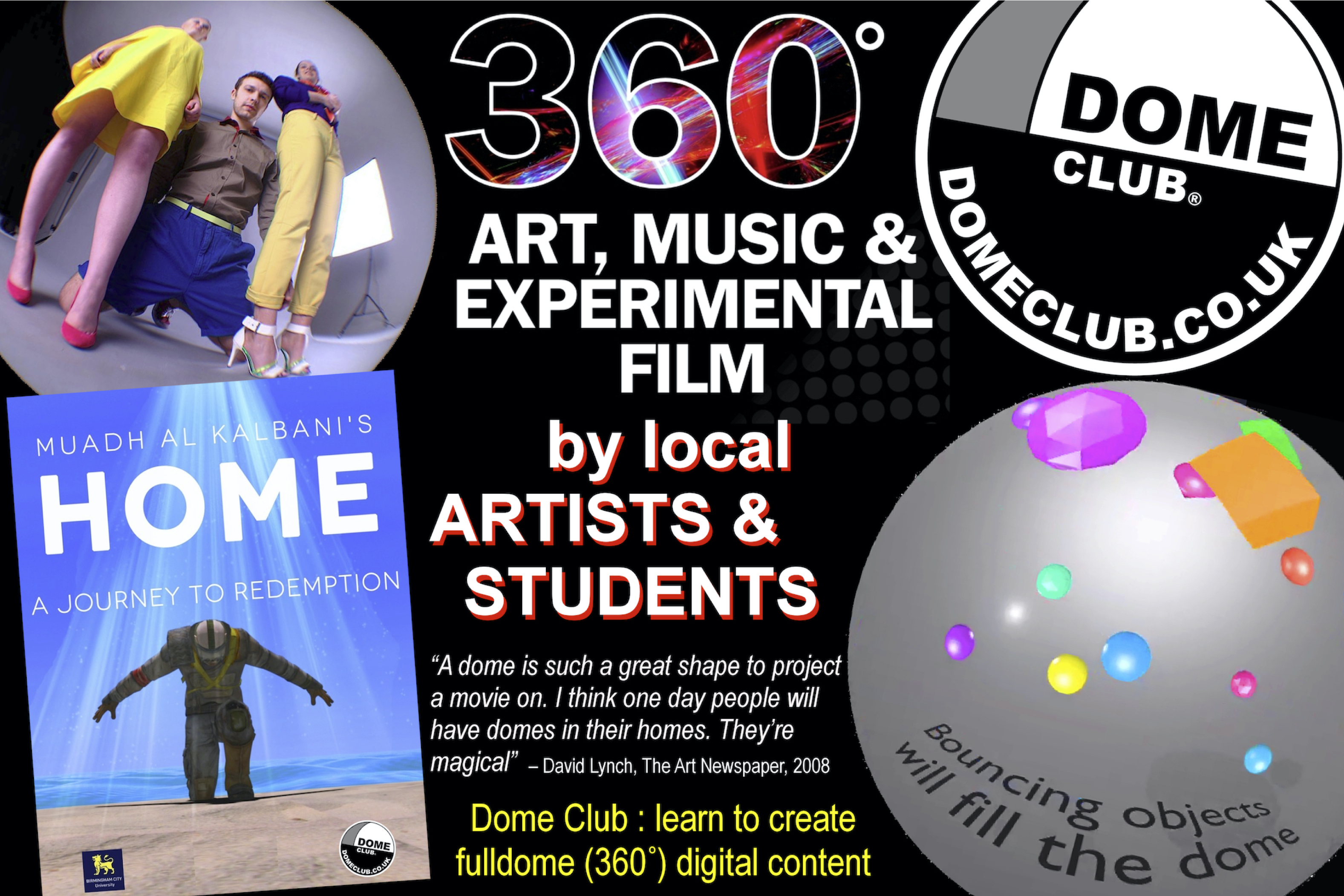 Sadly this short-sighted attitude towards creative initiatives is common in UK planetariums / science museums and has not gone unnoticed. British singer-songwriter Mike Batt discovered this in 2014 when no UK digital dome was interested in screening his stunning 360° production Voices in the Dark. 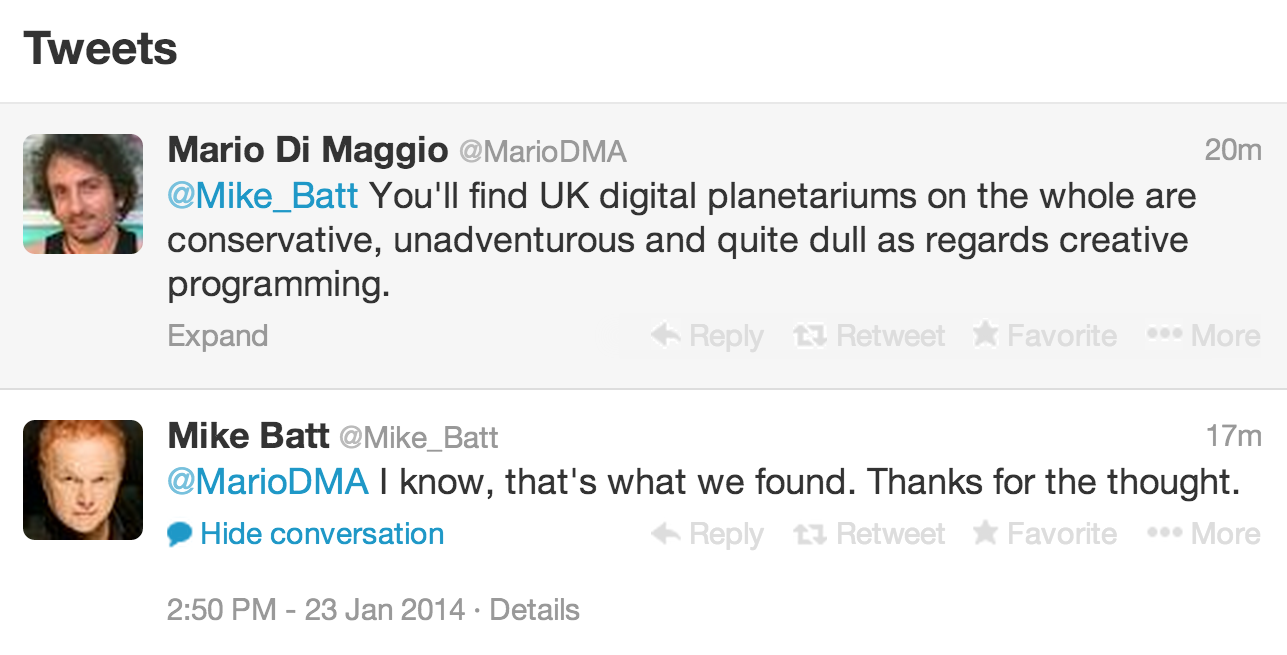 Happily the Dome Club initiative at Thinktank encouraged a few planetariums around the world to launch their own versions of the event and attract new audiences to their museums. 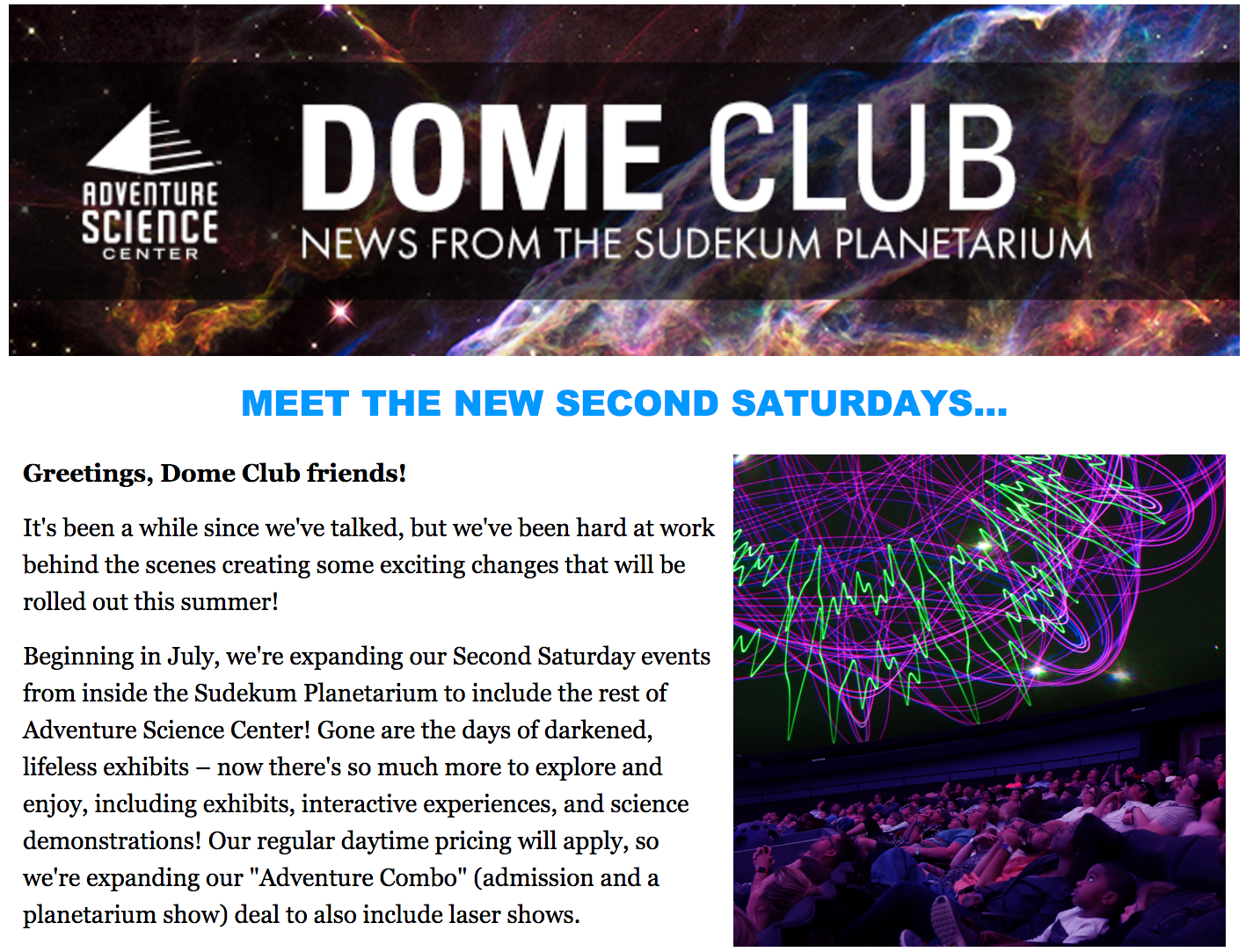 Of course I wasn't going to let my redundancy (which in retrospect turned out to be a huge blessing in disguise) bring an end to Dome Club.

I used the money from my Thinktank settlement agreement to purchase a 7m inflatable dome, and continued running Dome Club events in Birmingham at The Custard Factory (in the Old Library, January 2014) and The Q Club (May-August 2014). The capacity of the 7m dome was 30 adults (lying down) and almost all the screenings were sold out. The success of the mobile Dome Club would not have been possible without the hard work and support of Yaz Alexander. 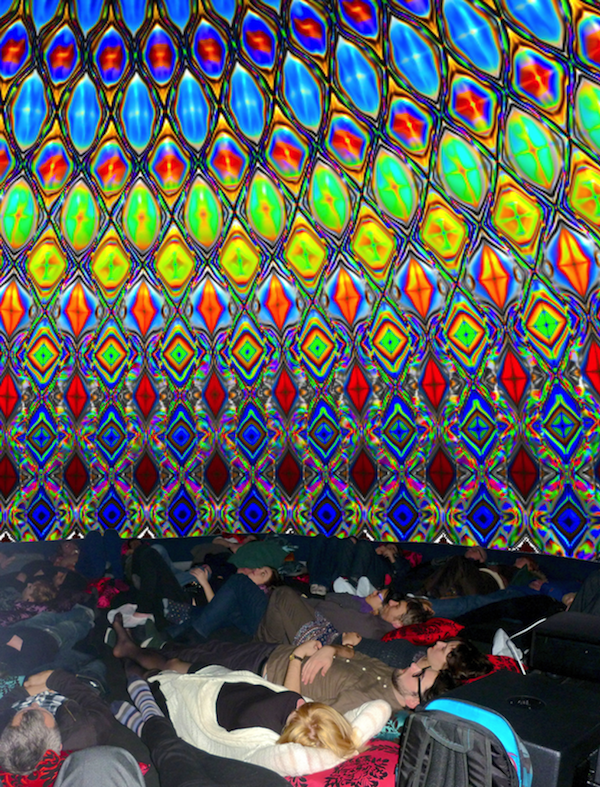 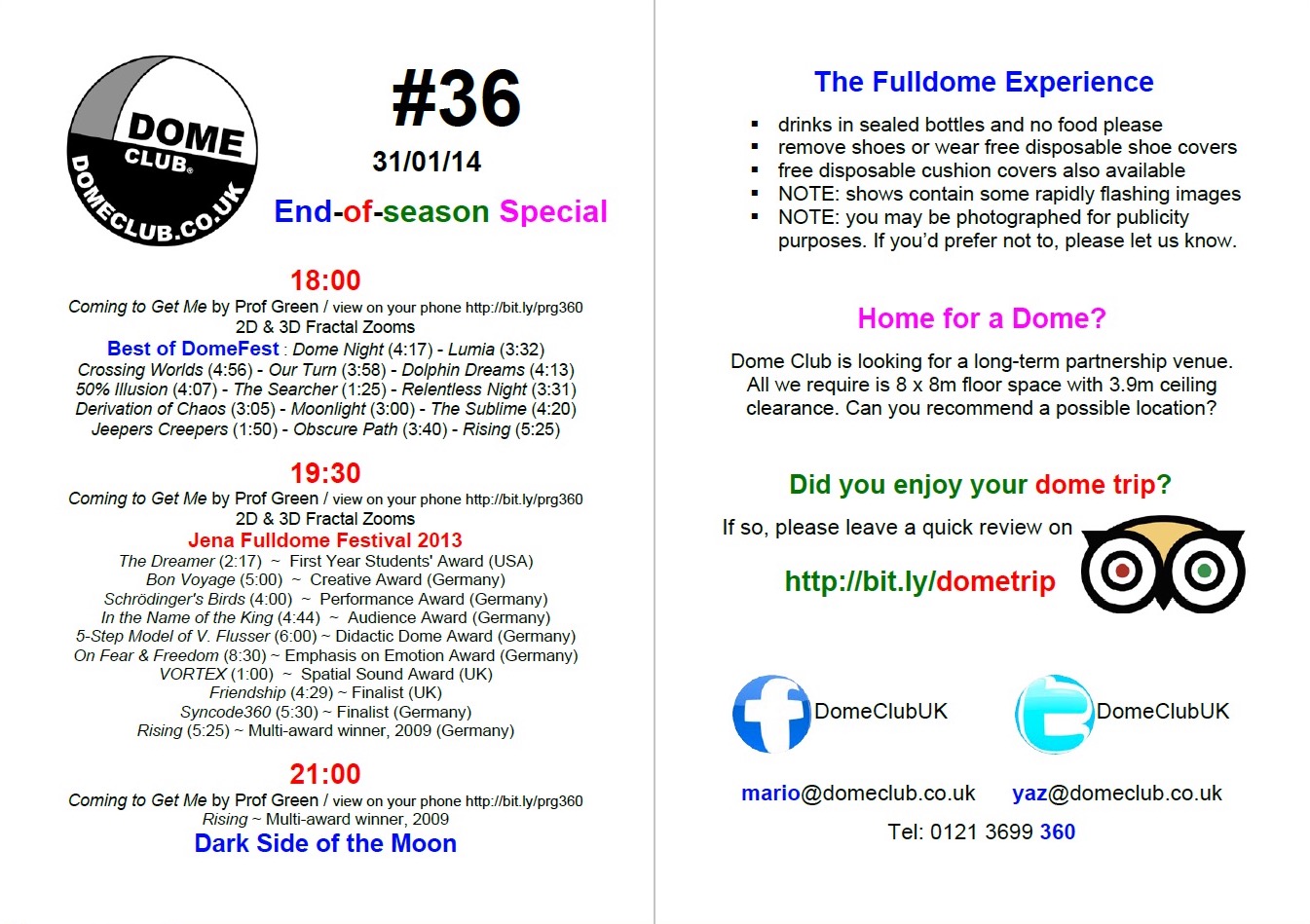 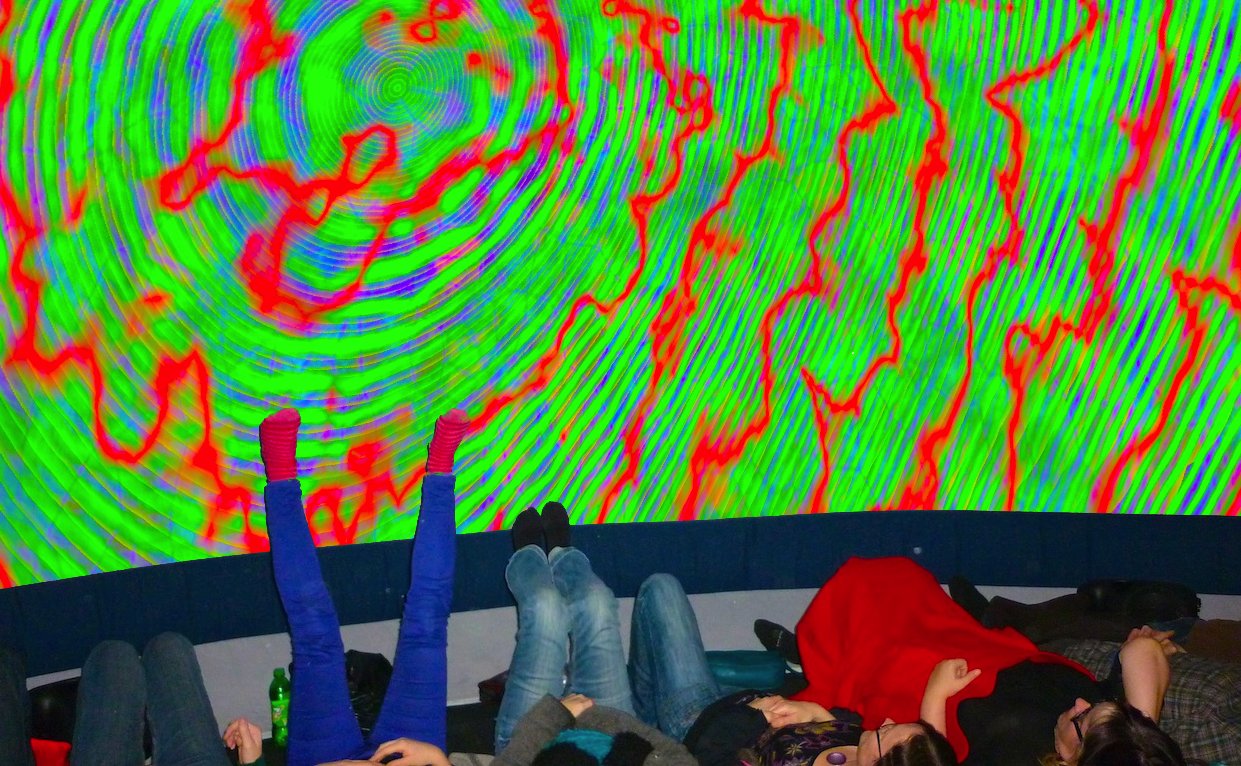 In September 2014 I moved to Bristol - and from then on the mobile Dome Club experience has been available via my business Immersive Theatres. It has been booked by music festivals, art centres, university conferences, business social events, university balls, birthday parties and even private homes.

In March 2016 I changed the name of my business to Dome Club Ltd (trading also as Immersive Theatres).

It was of course a great shock to be made redundant from Thinktank Science Museum, particularly after all I had accomplished with the planetarium alone, not to mention the entrepreneurship of Dome Club.

Thinktank Planetarium had become recognised worldwide as a leading digital dome, and as soon as my redundancy was announced protest letters of support were sent to Thinktank / Birmingham Museums Trust by the International Planetarium Society [letter]; IMERSA, the organization for Immersive Media Entertainment Research Science & Art [letter] and CERN, the European Organization for Nuclear Research, with whom I was collaborating on a fulldome film about dark matter [letter].
Nevertheless, as two of the many supportive emails I received below predicted, establishing my own mobile digital dome business has been a wonderful adventure, and I'm now indeed in a far better place - financially, emotionally and creatively.

The Thinktank Dome Club web page, as it was in August 2013